This review will be in two parts. One part about the dance (yes, this is a dance show) and one about the spoken aspects of the show (which, due to a proclivity for answering any question asked in my vicinity, I might have influenced {apologies from me [and kudos for making such a realistic experience]}). 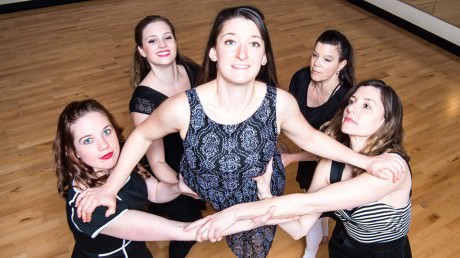 The central conceit of the show is that the dancers were recruited by a research lab to demonstrate the efficacy of a five person team comprised of specific personality types. The first dance is a traditional modern dance duet. The dance was pretty enough, but left me wanting to see others included as the repetitive nature of the piece was a bit unfulfilling. The second piece, which utilizes all five dancers was beautiful. The five dancers synergize in a wonderful climax.

The piece as a whole is MCed by a “researcher” who is so awkward as to make you squirm in your seat. I now assume that this was all staged, though in the moment I didn’t realize that. So when he started asking questions, I started answering (apparently, it’s not enough for me to write the reviews, I have to be a part of the show as well). I suppose that this would be the epitome of a “fringe ” experience. Blending art and the reality it mirrors.

So, the dance is well- performed and the acting is good enough to fool me into participating in order to end the insanely awkward silences. Bravi!