Longtime DC theater company Guillotine Theatre mounts a new play by Monique LaForce that is a crazy mash-up between Egyptian gods, the fathers of psychology, and the NYPD. This is a romance/cop-show/re-imagined myth that had the audience laughing out loud.  They are definitely Fringe veterans – giving the audience water and fans before the show even starts. 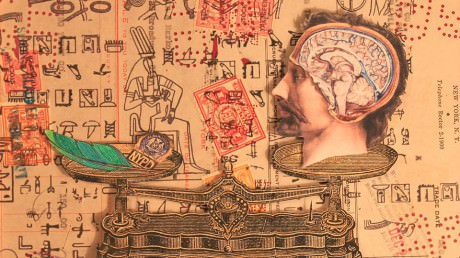 Director Carl Brandt Long does a lot with a small space as the action spans the realms of the gods, Freud’s couch and the NYPD headquarters. The cast definitely makes the play. Cate Brewer (Isis) enters dressed in a shimmering cape a bullet proof vest and handcuffs. She is a goddess who is taking a break by fighting crime. She partners with a slick felon, Vesco (Sun King Davis) and their chemistry is fun. Her husband Osiris (Paolo Santayana) is working for the CIA with Maat (Michelle Hall-Norvell). Hall-Norvell belongs on a much bigger stage; she has a larger than life presence. He is working for them by trying to get cocaine from Dr. Freud (Terence Aselford) who is so hilarious – even when he’s just laying around as a dead body. Catherine Aselford and Katie Jeffries (Dr. Fleishel-Marrow and Shirley) round out the cast as a medical examiner and Jeffries every other role needed onstage, each one unique.

The language of the prologue sounds like Shakespeare and most of the rest of it rhymes in more modern language and it’s fun to revel in the English language with LaForce. I’d say the only downside is that it’s too short. By the end of the play the actors seemed to be running around and the end felt unfortunately rushed. LaForce set up a big story and it would have been great to see the whole thing play out, but for the time they had available, it was fun to visit with these crazy characters thrown together in a way I am sure has never been done before.

Isis and Vesco is innovative and fun theater.

Isis and Vesco Investigate the Curious Death of Dr. Freud plays through July 26, 2014 at Redrum – 612 L Street in Washington, D.C. For performance times and to purchase tickets, visit their Capital Fringe page.