You can easily miss him. Lying on the floor in dim light, dressed in grey, still as death, he is easily overlooked. It is the young woman, her dark blond hair held back with a tortoise-shell barrette, seated at a small aluminum table with kitcheny floral cover and engrossed in a book whose pages she turns with deliberation to the sounds of a celestial choir, who holds our attention. 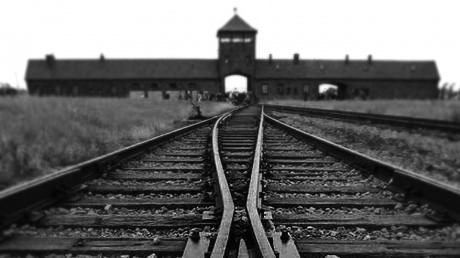 The peace is deceptive.  In fact, it may well be the last peaceful moment we will have  That fact is brought home to us with a violent eruption of sound and movement that seizes that attention, forcefully and kinetically, as a man brings home with him—more precisely, drags down the aisle between us—a man in uniform.  It is Jacob (Brandon Herlig), whose “catch” puts him, David (the fellow on the floor), Zsuzsanna (the young woman)—Hungarian Jews in hiding—and the Nazi soldier in a situation whose options range from murder (or could it justly, all things considered, be construed as execution?) to a precarious trust of one who could get them out.  Or just as easily—actually, far more easily—turn them in. And while none of them knows the specifics of what that would mean, all of them know enough—Jacob, whose best friend was packed into a rail car and never heard from again: more than enough.

But then there’s the German’s gun, which switches hands among the trapped, desperate occupants, a couple of whom become loudly, nervously (and, for the audience, nail-bitingly) trigger-happy. If all four emerge together, Erik’s superiors may notice his gun is missing. If he has the gun, the Jews have no assurance he will keep his word.  And why should he?

“When the Nazis came [to Hungary],” writes Dramaturg Halah Zenhom, “they moved swiftly, having perfected the art of extermination, and removed nearly the entire Jewish population of Hungary in a few short months.” Would David, Zsuzsanna and Jacob be among the few who survived the horror? Which way, in the end, would the possible ambivalence of their captive captor turn?

Sam Taylor’s Erik is physically perfect: blond-haired, blue-eyed, ramrod straight.  He also gives us a young man who is essentially unreadable.  Sometimes this works; sometimes, less so. As Zsuzsanna, Brittany Martz gives us a thoughtful, determined young woman still capable of losing it without warning. That said, while her shrieks and threats are arguably character-driven, at times they can appear somewhat arbitrary. Eric Schlein’s David is the voice of reason, and Schlein plays him with studied calm while still recognizing his susceptibility to circumstances, and to the emotions they arouse. As Jacob, Brandon Herlig is a hero in Tarantino mold, ready to raise voice and gun at what seems, to less easily excitable (and less stressed-out) souls, the slightest provocation.

Eliza Perez’s settings and costumes are on the money, as are Alec Henneberger’s lighting and sounds design. The story itself is compelling in parts, but has a couple of loopholes. (It was shortened by a third, from its original 60 minutes to 40, which may account for it.) If they have you leaving uncertain, that may not, in the end, be a bad thing. Uncertainty and insecurity are things the characters in Uniform, and the many hundreds of thousands of people they represent, lived with—and, abandoned by the world, died with. “It is difficult to capture the magnitude of the atrocities of the Hungarian Holocaust in a few short words,” writes Zenhom. But worth trying. And well worth seeing.

Recommended for audiences 13 years and older.

Uniform plays through July 27, 2014 at Gearbox, 1021 7th Street, NW in Washington, DC. For more information and to purchase tickets, go to their Capital Fringe page.