James Judd’s Killer Quack is one of those rare moments in the theatre that moves the audience along the spectrum of emotion. For fifty-five minutes, Judd walks an emotional tightrope, with moments when the audience believes he’ll fall into melancholy, or humor, but he never settles in an emotion. The beauty of the work that Judd has composed, or rather lived through and repurposed into this evening of storytelling, is that he spends time in the grey areas of emotions, where humor and drama coincide, and where self-awareness and uncertainty overlap. 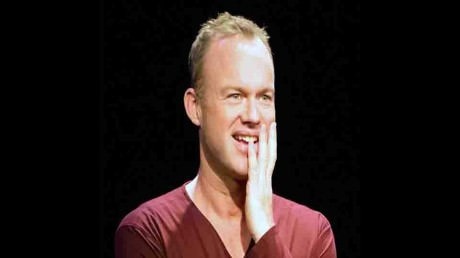 At the top of the show, Judd addressed the audience with a warmth and honesty that carried over well into the performance. He dedicated the performance to the memory of Elaine Stritch, announced that it was his 10th anniversary with Capital Fringe, and that while his show was marketed under the dance category, there would be no dancing. With this introduction, the audience was nonchalantly introduced to their guide for the evening, who also happened to live the story that they were about to hear. With a charming smile, and crisp speaking voice, Judd won us over.

Without giving too much away, and allowing you to ride the rollercoaster of events and emotions with Judd and his audience when you see the performance, I will let you know that Judd’s story begins in 1998 in New Hampshire, as Judd had his whole future ahead of him. Little did he know that a trip to an Upper East Side dermatologist, to have a tattoo removed, would change his life forever. Completely taken by the dashingly attractive gentleman, this begins Judd’s history with a one Mr. Dean Faiello, who is on a deceptive life path until it catches up with him.

Judd’s performance is utterly awe-inspiring on a number of levels. His energy level and commitment to the characters and the work is unwavering for fifty-five minutes. Character choices are sustained wholly for the span of this performance. The fact that he has come to terms enough with these events that transpired to live them out onstage is transcendent of the Capital Fringe Festival, and I can only hope that the relentless applause after tonight’s performance serve as catharsis for his seemingly indomitable spirit.

Attention must be paid to the director of this piece, , for taking this rollercoaster ride of experiences and not only handling them with care, but also punctuating moments and helping to create a dynamic arc to the evening. While I am sure Judd is an absolute joy to work with, it would seem daunting for any director to step in and lead someone through events the other person has lived through and is retelling in a piece of theatre. Having another set of eyes on the piece, in this case as director, definitely elevated the piece. Haney is to be commended for breathing a different perspective into this work, and it would appear that the two had a harmonious collaborative relationship.

In terms of the structure of the piece, Judd doesn’t end Killer Quack by tying a neat little bow on the story and saying that they all lived happily ever after. He has a series of questions that he is still asking himself, and that we in turn can ask ourselves about events that have transpired in our own lives. The universality of emotion that can be found in the specificity of Judd’s story is beautiful and makes this piece a must-see in this summer’s festival. I am tempted to return for another performance (which is something I seldom feel), now that I’ve written my review, so I can see what kind of depth I can find now that I’m not writing on the piece and can experience it like my fellow audience members.

Killer Quack is playing through Saturday, July 26, 2014 at The Goethe Institute – 812 7th St NW, in Washington, DC. For more information, or to purchase tickets, check out their Capital Fringe Page.