Maryland Lyric Opera presents its debut season at the Clarice Smith Performing Arts Center at the University of Maryland, College Park with the stunning and beautiful production of Cavalleria Rusticana and I Pagliacci, passionately directed by Jay D. Brock. I am an opera ‘newbie’ and I am not only grateful for the hospitality that was shown to me, but the opportunity to be thrilled by this glorious production. You’ll see me more often at the opera. 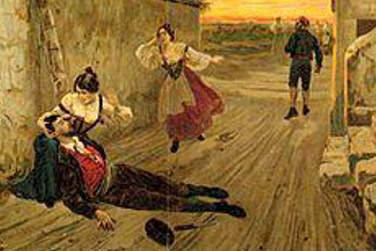 Founding MDLO Director Brad Clark and General Artistic Director Henriette Lund (Clark, an alumnus, and Lund, a faculty member of The Catholic University of America’s Benjamin T. Rome School of Music) brought their collaborative efforts to fruition in July 2013 as they united young student artists with professional singers in a mentoring program. Together with General Manager Ninna Moore, Senior Manager Eric Gramatges, and Marketing Consultant Ana Astrid Molina, they make magic, bringing an entirely new appreciation of opera to an already-acquainted as well as a newly-acquainted generation of concert goers.

At first glance of the Kay Theater, you are swept into a view reminiscent of an old-time Broadway theater that has quietly intermingled modern technology in the lighting, translations screens on either side of the stage, and superior sound quality.

Cavalleria Rusticana is an Opera in One Act, with music by Pietro Mascagni, libretto by Giovanni Targioni-Tezzetti and Guido Menasci, and based on a popular play and short story by Giovanni Verga. It premiered at Rome’s Teatro Costanzi in May 1890, making its way across Europe to sold-out audiences, and finally to the United States where it appeared in Chicago, Philadelphia, and the New York Metropolitan Opera.

I Pagliacci, Opera in Prologue and Two Acts, with music and libretto by Rugerro Leoncavallo, premiered at the Teatero Dal Verme in Milan in 1892, and was subsequently staged at the Metropolitan Opera alongside Cavalleria Rusticana in December 1893. As these two operas are in the verismo style, they are often performed together because of their striking similarities: a triangular tale of love, betrayal, rejection and murder—and everything in between—all of which inextricably links them.

With Conductor Joel Borrelli-Boudreau leading the quintessentially beautiful orchestration, the night began to sounds of bells chiming. As the curtain rises, the opera company, composed of men and women dressed in tuxedos and gowns, converge on the stage. Imagine for one moment that the stage is a 19th century Sicilian village on Easter morning, where the people are arriving from their homes to attend church. On one side of the square is the church; on the other is the wine shop and home of Mamma Lucia (Anamer Castrello), who lives with her son, Turiddu (Lázaro Calderón). Castrello’s voice holds serene clarity in her passionate and compelling lament as Turiddu’s mother. As the young men and women mill about the square, their powerful force of delivery as they sing “Gli aranci olezzano sui Verdi margini “– “The air is sweet with orange blossoms” and a hymn to the Blessed Virgin, actually made my skin tingle. Off-stage, Turiddu is heard signing The Siciliana – “O Lola, lovely as the spring’s bright blooms.” You feel Calderón’s full investment in his voice and in the character of the enchanting musical dialog.

Here is where I was swept into performers’ arias, and the pure joy, precision, and power that belongedto the very talented cast – both the chorus and the solo performers—that even to the uninitiated ear, the voices—and the music—are angelic. They are at times dramatic and forceful, while at other times quiet and almost reverent. The principle members have perfected their craft, lending such powerful and passionately delivered words that both enthralled me and excited the very audience they were entertaining.

Sandra Schwarzhaupt delivers a very convincing performance as the temptress Lola, utilizing her amazing range to effectively seduce the male characters. Guido LeBrón’s performance as Alfio takes us into the worlds of jealousy and revenge, where you embrace his powerful delivery. As Santuzza, Fabiana Bravo’s voice is scintillating, taking us deeply into the core of the character whose heart is broken.

As a young villager, Turiddu returns home from the army and discovers that his fiancée, Lola has married teamster Alfio. In an attempt to forget her, he becomes engaged to Santuzza (Fabiana Bravo), a young woman in the village. Lola, upset by Turiddu’s new relationship, begans a torrid affair with him. And without giving away the rest of the plot, I will say that it kept me on the edge of my seat and I really enjoyed the drinking song “Viva, il vino spumeggiante – “Hail to the bubbling wine!” and the bloody tragic ending!

I Pagliacci is a play within a play. With a wonderful chorus filled with children and adults, the excitement level grows as they anticipate the performance by the ‘prince of clowns’ Pagliacci -played by Canio – and sung with so much power and emotion by Marc Heller. Canio performs along with his wife, Nedda (Sara Beth Pearson), and fellow performers: Tonio (LeBrón) and Beppe (Aaron Halevy). But it’s jealousy that make Canio boil and right away I knew that trouble lies ahead.

As Nedda, Pearson has the uncanny ability to use her voice to draw the audience into her dual world of her character’s deceit and self-pity. She turns to Silvio (Nemeh Azzam), a devoted, yet gullible local man who pours his heart out to Nedda, hoping that she’ll flee with him, and she achingly delivers back to him. Their exchange is both haunting and sad, as they know they are doomed.

Alone, unloved and rejected, Canio believes he cannot perform.  He reminds himself that he is a clown, and must play the part, even though his heart is breaking and now I know why the aria “Vesti la Giubba” is so popular and why it’s so often performed by every tenor in concert. I still have chills thinking about Mark Heller’s heart-wrenching finale:

Laugh, clown,at your broken love!Laugh at the grief that poisons your heart!

Cavalleria Rustaticana and I Pagliacci, while retold on a modern stage, its message is still relevant and timeless, and will continue to delight audiences for many generations to come. And I urge everyone who has never seen an opera on the stage to buy tickets to see Maryland Lyric Opera’s moving and beautifully sung production.

Cavalleria Rusticana and I Pagliacci plays on Saturday, July 26th at 7 PM and Sunday, July 27th at 2 PM at Maryland Lyric Opera performing at the Clarice Smith Performing Arts Center at The University of Maryland –3800 Clarice Smith Performing Arts Center, in College Park, MD. For tickets, call the box office at (301) 405-ARTS (2787), or purchase them online.