The Kingdom of Far Far Away is coming to Chantilly High School. The Alliance Theatre is excited to announce their Summer 2014 production will be Shrek The Musical.

Based on the Oscar-winning DreamWorks film, Shrek The Musical brings the hilarious story of everyone’s favorite ogre to life on stage. In a faraway kingdom, our ogre-hero agrees to rescue the beautiful and feisty Princess Fiona for the short and short tempered Lord Farquaad. Shrek must face down a fire-breathing dragon with his wise-cracking pal, Donkey. Along the way, they encounter a dozen other familiar characters in the most entertaining fairytale ever. Nominated for seven Tony Awards and a Grammy for Best Musical Show Album, Shrek The Musical features popular songs “I Know it’s Today,”  “Who’d I Be,” “This is Our Story,” and the smash-hit “I’m a Believer.” With music by Jeanine Tesori and book and lyrics by David Lindsay-Abaire, this show is filled with singing and laughter for the whole family.

For The Alliance Theatre’s production of Shrek The Musical, Scott Olson directs, Laurelyn Morrison is musical director, and Maggie Swan is producer. The team of Annie Ermlick, Josh Nixon, and Chris Rios direct the choreography.  Prosthetics are being created by Carl Randolph of Morphiage.  Leading the cast in the role of Shrek is Glynn Cosker. The role of Fiona is played by Jennifer LePaige, and Donkey by Devyn Tinker. The show features a large cast, including more than 30 Summer Stars, young artists who, when not on stage, receive training in acting, improvisation, voice, dance, audition techniques, stage combat and performing for the camera. 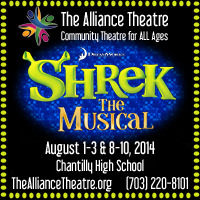 Show dates for Shrek The Musical are: