Scenic Coordinators Stefannie Smith, Geoff McPherson, and Matthew Westcott segment the stage into three main sets, the main area being a plat formed stage for a live country band that is framed by an old-time motor garage and Route 31 diner. The plot of this story spans Williams’ lifetime, 1923-1953, and takes us many places, from a small town in southern Alabama to the regal stage of the Grand Ole Opry. This is a lot of time and space to cover, and by using small details such as vintage aluminum signs and creaky rocking chairs, the effects are both efficient and authentic. Lighting Designer Joseph Wallen lends a lot to the drastic changes by going from subdued, muted tones to fancy spot work, and Costumer Gaye Law shows Williams’ success through his wardrobe, which gets finer as the show progresses.

However, the real star of the show is Hank Williams himself– or should I say, Robbie Limon, whose portrayal of the country singer is so powerful and precise that he may as well be the real deal. The show begins with a radio announcement of Hank Williams’ death, while his mother (Constance Shofi as the strong-willed Mama Lilly) reminisces about his humble childhood.

Elliot Dash is outstanding as Tee-Tot, a mentor figure for the Hank, who helps the young artist hone his craft (at one point saying, “go home, your scaring my chickens” to the warbly-voiced boy. Dash’s voice is supremely rich and powerful, with my favorite number of his being the moving “This is the Way I Do.”

As Hank matures, he teams up with his friends Jimmy Cherry (Jimmy) and Luke Gray (Leon) to create “Hank and the Drifting Cowboys,” a musical act managed by his mother. The band shows great potential, rousing the crowd with entertaining numbers such as “Honky Tonk Blues.” However, a chink in the armor arrives in the form of Audrey Williams (a humorous yet bittersweet performance by Jackie Fields), Hank’s young wife who insists on being a part of the act, despite the fact that her voice is horrendous (her rendition of “I’m Gonna Sing, Sing, Sing” is almost painful to watch). Hank’s growing hesitation to include his wife causes a bitter tension, and leads to martial turmoil. While Hank was able to create ground-breaking art through his problems (the popular number “I’m So Lonesome I Could Cry” had audience members in tears), it also took a serious toll on his emotional health. Hank seemed to have all the fame and success a person could want, but his personal troubles paired with heavy drinking plagued him until the end of his short life.

The cast of this production is extremely talented, and they were a joy to watch. Some of my favorite musical numbers were the lively  “Jambalaya (On the Bayou)” and the classic “Your Cheatin’ Heart.” I took my father with me to this show, and he was excited about it because he grew up with Hank Williams’ music. My dad thoroughly  enjoyed it (and he’s picky!), as well as the rest of the audience, who greeted the cast with a highly enthusiastic and well-earned standing ovation.

Running Time: Approximately two and a half hours, including one 15-minute intermission 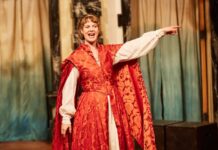 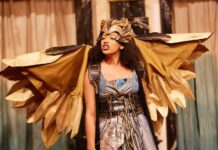 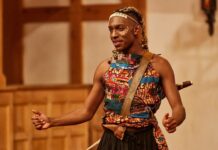