Plunging into the Deep with Kafka’s Metamorphosis

Alliance for New Music-Theatre is taking a plunge into the deep, staging a production of Kafka’s Metamorphosis. When Barbara Karpetová from the Czech Embassy asked if our company would mount a production for this year’s Mutual Inspirations Festival and that the subject of this year’s month-long festival would be Kafka, not surprisingly perhaps what leapt to mind – and I leapt to “bag” the opportunity – was Metamorphosis.

The story is Franz Kafka’s most well-known and iconic work. Its opening line can be recited by many, one which introduces the central metaphor. A young man (Gregor Samsa) awakes from uneasy dreams and discovers he has been transformed into a ungeheuren Ungeziefer – translated as monstrous insect, dung beetle, or vermin.

Many academicians and others consider this 20th-century novella “perfect.” It is not only about a monster but comes, as one writer put it, “trailing clouds of monstrosities.”

Ask people what they think Kafka is about and most people will come up with “weird,” “dark,” depressed,” and “full of angst.” The word Kafaesque has entered our vocabularies signifying our most terrifying nightmares of ostracism. I wondered what the Alliance might we bring to the conversation.

I knew I wanted to structure a process that would take us out of our comfort zone, making this an experience needing several stages, one where we might explore a radical musical-theatrical language for Kafka. We would take as our focus Kafka as the quintessential “outsider’s outsider.”

Perhaps we could never fully “understand” Kafka, this genius who read in nine languages, drew as well as wrote, and, as a German-speaking Jew, living in Czech-speaking Prague under the Austro-Hungarian empire, not only cared passionately for the welfare of Jewish refugees but seemed clairvoyant in seeing the Holocaust to come. Nonetheless, this work demands for someone to encounter it through individual interpretation and what better choice than the most interpretive of art forms — theatre.

The work — like theatre — is about transformation, and we continue to explore a style of delivery that reaches as far back as Ovid and has some of the juiciness of man-into-beast transformation found in classic Yiddish folk tales and theatre as these were both influences on Kafka.

Music-theatre is our terrain, and we are forever asking, “What is music-theatre?” How could we find a language that would not only create an interior landscape of the central figure of Gregor as the outsider’s outsider, but how could we express musically his emotions as he struggled to communicate with the world around him?

We had source material in composer Hugh Livingston’s soundscapes. But Hugh had to take on two important commissions and could not participate in what we now are calling the work’s “first iteration.”

So four actors, a musician, and I set out to find a musical language together, starting with text and sound textures. In doing so, all of us were stepping out of our comfort zones for sure.

From the first, live cello was part of the vision, and I invited Yvonne Caruthers to join the company. Yvonne is a cellist who spent over three decades playing with the National Symphony Orchestra, and now I was asking her for Bug Crawling Music, Insect Eating Arias, and the like. She had told me frankly in our first conversation that she did not improvise. Nevertheless, into the depths she plunged. We have found in Yvonne a brilliant, fearless, and most fun performance artist and collaborator.

The actors are all from different backgrounds. David Millstone sees himself primarily as a dramatic repertory actor, but his imposing frame and rich deep speaking voice made me feel at once I had Gregor’s Father who could experiment in the world of music-theatre and be both pathetic and ferocious. Ari Jacobson impressed me as someone who could pull off the dual role I had in mind for Kafka/Gregor. His knowledge of music, Kafka, and Eastern European Jewish culture have all added immensely to the mix, and his vocal work improvising with the cello (Gregor’s alter ego) has brought tears to my eyes. Pamela Jusino is a wonderfully gifted actress whom I’ve worked on and off with for twenty years, but now I am pushing her to create a weepy and even at times hysterically unlovely creature. Lily Kerrigan is a fresh new face for me, but this young actress has reserves of steel that keep surfacing, and her character’s journey is the most chilling in the story.

These actors go with every crazy thing I throw at them. With everything they bring, I get new ideas to shape the work and ask them to go further – so Ari has to perform much of his role upside down and sometimes swinging from the light grid, and all of them have to sing in Czech and Hebrew. On we go ever more deeply trying to push ourselves to discover an expressionistic style of acting that nonetheless carries emotional truth.

Then there’s the humor. It’s something overlooked, I think, when many people think of Kafka, but the man had a wicked sense of irony and the absurd. Through the humor, we could plumb the influence of Yiddish folk tales and theatre. This in turn helped us develop a style of physicality. I insisted the family have their moments of levity and togetherness, and this I hope brings moments of sympathy for all members of Gregor’s family.

In my early research, I had fallen in lover with Kafka’s drawings and thought we might incorporate animation into our production. (I must admit I had begun taking liberties with the script while thinking I might have also taken leave of my senses. I am phobic about technology.) Talk about pushing oneself way out of one’s comfort zone! 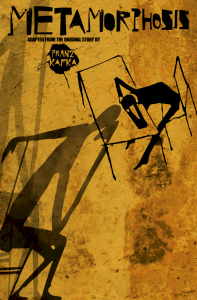 We plunged in nonetheless. Animation solved our challenge to keep this a chamber music-theatre piece suitable for touring. It has also made the most wonderful connections with Kafka-as-artist’s imagination, conjuring up images and characters with the images in turn leaving lambent traces.

So what does Kafka have to say to the 21st century? We are so looking forward to engaging audience after every show with their own interpretations of what they will see on stage and about Kafka’s work.

So what should people expect when they come? The only thing we can say for sure is that Metamorphosis is not “normal.” But then, as Kafka once said, “Not being normal is not the worst thing. What’s normal, for example is World War.”

This year we commemorate the war to end all wars, a war that Kafka survived only a few years later to die before his sisters were then killed in concentration camps. So what have we learned? How do we treat “outsiders?” Are we all perhaps “outsiders?”

We have already been invited to bring the show to New York and next year back to Prague. We’re excited but also terrified. How Kafkaesque!