To put it bluntly, Art is not about “art.” While the “white painting with diagonal white lines” is the focus of the action, the gravitas below the surface is what makes this new production so compelling.

Vagabond Players kicks off their 99th season with this fiery play by French playwright Yasmina Reza. The play’s structure expertly sets the scene for gripping drama, high comedy, and everything in between. By following convention, and running the show without intermission, Director Howard Berkowitz keeps a tight rein on the action. The pace never drags; in fact, it flows wonderfully – with each interchange striking the next.

For a play about “art,” this work needs to have “style” – and does it ever. There are many things to commend about this design team. The lighting design by Charlie Danforth III successfully makes three distinct places out of the same setting, due to subtle changes of color. As a viewer we see each man’s flat, which is distinguished by a unique shade of paint (via lighting) on the walls. The moments where each player has his own aside to the audience are also given their distinction. In regards to Costume Coordinator Ann Mainolfi’s  fine work, each actor is clad in something that excellently compliments their character: uptight Marc is wearing a modest black suit, stylish Serge has a flashy blue oxford shirt, and manic Yvan is clad in the most normal outfit of the three.

Maurice “Moe” Conn has designed a fine set for this intimate space. It successfully conveys the mood of the world that these men live in. The starkness of the furniture and set pieces enables the acting to take the focus, as it should in a play like this. There’s so much wonderful detail, right down to the rosettes in the moldings. The proscenium is enhanced by a gold frame, which creates the illusion that the audience is watching the “art” unfold onstage. Also, the brief scene changes are given extra life with the addition of original music by Marc Irwin. The subtle, lively tones are a welcome addition. 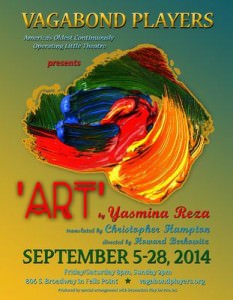 Overall, the acting in this production is great. All three gentlemen have a compelling control of the text that really brings these men to life. Each character is so fundamentally different from the other, and they play off of each other beautifully. Berkowitz must be applauded for this casting. As the dry center of the action – Marc – Mark Scharf keeps the calm, moral center. While it is not glorious to be the quote/unquote “straight” man in this comedy team, Scharf fits the role well.

Steven Shriner makes a fine Serge. He is very believable as the stylish, newly-divorced playboy who has purchased the infamous painting. The electricity in his eyes makes his motives and passions relatable. While Serge may be over the top and from the Frasier Crane School of Manners, Shriner never once makes him a caricature. He drives the action along every time he appears on stage.

As the neurotic Yvan, Eric C. Stein knocks it out of the park. His energy never falters, from his first entrance to the last; Stein’s commitment to the role is remarkable. His physicality is so in tune with the character that you can’t help watching him – even when he is not uttering a word. In play like Art, where language is so important, that is commendable. His outrageous diatribe upon his entrance into Scene 5 alone is worth the price of admission.

When all three men are working together, they are firing on all cylinders. It’s as if we’re watching a gripping tennis match, the way the jabs and barbs bounce off of each other so gracefully. Art has three dynamic performances, and is an exciting night of theater. Be sure to check it out because – unlike a painting – it won’t last forever.