John Philip Sousa, one of America’s greatest composers, was primarily known for his famous marches. Over the course of his career, however, he also wrote a number of operettas. One of the lesser-known and rarely-performed operettas is The Charlatan, a farcical tale of Gogol’s attempt to have his nephew, Boris, marry a princess in order to avoid punishment from the Czar of Russia. Gogol meets a magician named Demidoff, who partakes in Gogol’s scheme by palming his daughter, Anna to marry Boris under a fake name, Princess Ruchkowski. Gogol’s daughter, Sophia, finds out about the scheme and later hatches her own plot with a girl named Katrinka to make Katrinka appear to be the Princess Ruchowski. Both plans hilariously backfire when the real Princess Ruchowski discovers her name has been stolen.

When the operetta originally debuted in New York City in 1898, it was met with unfavorable reviews. At the time, The New York Morning Telegraph called it, “Sousa’s worst.” Sousa and star DeWolf Hopper ended up revamping the show and taking it to London, re-titling it The Mystical Miss, and receiving much better reviews.

This weekend, Rockville’s The Victorian Lyric Opera Company (VLOC) took on the exceptional score and the problematic script of The Charlatan in a semi-staged concert version, with music direction by Joseph Sorge, direction by Elaine W. Kass, and lovely costumes provided by Denise Young and props by Jane and Carlton Maryott.

I attended the final performance on September 7, 2014 of the three-performance weekend run, and despite a few technical problems, the show was enjoyable. The script, while flawed, lent itself to some fun-spirited character acting. Kevin Schellhase hilariously portrayed the multiple personalities of Jelicoff. He was at his best disguised as a woman, conspiring with Katrinka (acted splendidly by Amanda Jones). Demidoff, as played by G. Stephen Stokes, and Gogol, played by Blair Eig, were also entertaining during the dialogue interludes, particularly during the trial scene. It should be noted that all of the actors read from scripts during the acting interludes, which was handled very well by all on stage. The large orchestra played the score beautifully.

Susanna Barasch (Anna), Jerrod Laber, (Boris) and Amanda Jones (Katrinka) all sang their roles beautifully and had the chops of professional opera singers. The vocal highlights of the show for me were Anna’s solo in “Venus Goddess of Love,” Boris and Anna’s duet in “Before the twilight shadows,” and “Social Laws,” performed by Jones, Barasch, Schellhase, and Stokes. “I am the seventh son of a seventh son” was also particularly catchy, and was sung in the second act with power by Stokes, Laber, Eig, and Don Mitchell (as Capt. Peshofski). 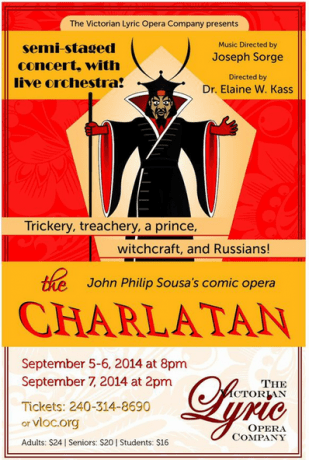 The Charlatan was performed on September 5-7, 2014 at The Victorian Lyric Opera Company performing at The F. Scott Fitzgerald Theatre- at the Rockville Civic Center – 630 Edmonston Drive, in Rockville, MD. Here is information on the VLOC 2014-2015 season.