When I was watching Wolf Pack Theatre Company’s intense Masquerade last night, written and directed by William D. Leary, I shook my head several times and covered my ears at other times because what I was watching and hearing was a family – a mother, father, sister, brother, and grandmother screaming out for understanding:

Why did their son, brother, and grandson named Kevin kill himself?

How did this young and promising, but lost man become another victim of suicide?

What kind of pain drove him to end his life?

What did each of them do to contribute to his pain?

What could they have said to him or done for him so that they could have saved him?

How could Kevin commit this ‘selfish’ act?

How could Kevin not see that they would now become the victims?

And the endless questions, and blaming, and regret, and more blaming, and anguish, and disbelief, and pain continued on the stage and flew into the Charis Center for the Arts’ intimate performance space for almost two hours.

Frankly, it was not easy to take (a little less screaming by everyone, especially Dad, would have been most welcome). Watching all this pain and lack of communication and respect for each other was, at times, unbearable and excruciating to watch and to listen to – and so damn real! (In fact my friend who accompanied me had to leave at intermission because he couldn’t bear watching so many people in so much pain.)

I felt like I was in a crock pot simmering away.

I wanted to book a trip to Key West just to experience why that beach-filled town gave Kevin some joy and hope -although, sadly, for only a brief time.

That all said, I really believed what was happening on the stage and that was due to the hard-working cast:

I don’t want to give away too much about why and how Kevin did it-because if you come see the show – and I hope you will – you will find out.

But what I will tell you is that William Leary and the entire cast is totally dedicated to bringing suicide to the forefront of daily discussions. Obviously with the recent suicide of popular comedian Robin Williams still in the news-more awareness of suicide has infiltrated the press and social media, and a play like Masquerade can only help to keep the discussion ‘in the news.’

And now some kudos to the cast.

Before last night’s ‘press’ performance, Lauren Giglio, who was playing the role of the Mom – Janet, had to leave the cast because of a family crisis. In came very brave Francine Joyce, who was given the script at 10 AM yesterday, and she did an admirable job. With the help of the script – and her caring fellow-cast members – Francine did a bang-up job as the guilt-ridden vino-toting pill-poppin’ mama. And she was guided with loving care through the script and some dark lit scenes. As they say,”The show must go on!” And it  did in Francine’s capable hands.

So a tip of the hat to Sarah K. Scott ( the spunky sister Kelli); Kelly Richards (Pastor Diana); Carol V. Calhoun ( tough Grandmother Emma); Alie Kamara (the human Energizer Bunny Alie Kamara as brother Kyle) and Tim Jansen, as the ever-angry ready to explode Dad named Steven). The let it all out for all the wold to see – the good, the bad, and the very, very, ugly, and some…hope.

My favorite scene in the show? Pastor Diana, played with humor, (much needed humor), assurance, love, and assertiveness by Kelly Richards, as she tries and tries and tries to get this battling family to concentrate on making funeral plans for Kevin and where to bury his ashes. Her Pastor Diana was the kind of spiritual leader I always yearned for- a compassionate listener who really cared about everyone in her congregation and who made no judgments about sexual orientation, education, financial and social status, and race. If they could only clone Pastor Diana…

Masquerade is a powerful experience; one that I will never forget. Come experience it.

Running Time: About two hours, including a 15-minute intermission. 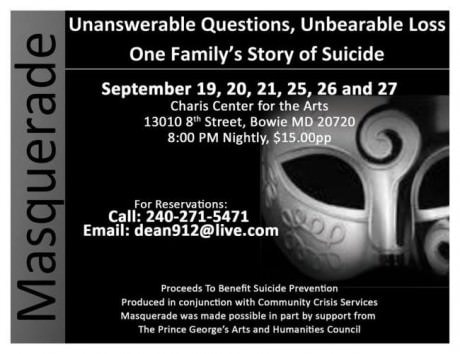