Fog was already filling the vast Concert Hall at the George Mason University Center for the Arts when I settled in to watch the first show of Virginia Opera Company’s 2015 season, Sweeney Todd: The Demon Barber of Fleet Street. There is no better way to kick off Virginia Opera Company’s 40th anniversary than with the gruesome, marvelous, darkly funny tale of the titular barber who exacts his revenge on unknowing customers by giving them “the closest shave they’ll ever have.” Expertly staged, beautifully sung, and with a double shot of Victorian macabre, Virginia Opera Company’s Sweeney Todd is a musical experience not to be missed.

Virginia Opera Company has long produced a repertoire that mixes classical and contemporary opera (in fact, the Demon Barber himself, the wonderful Stephen Powell, appeared as Falstaff in Virginia Opera Company’s eponymous production last fall). The vast majority of the show being sung, Sweeney Todd is indeed an opera, although it falls into the ambiguous twilight of shows (along with RENT and Jesus Christ, Superstar) that are technically operas but which are performed by many companies who wouldn’t touch Carmen with a ten foot pole. Needless to say, the chief advantage of an opera company putting on a more modern musical is that the show is packed with, well, opera singers. Stephen Sondheim’s music is anything but simple, and although plenty of good old fashioned musical theatre actors sing the parts just fine, Virginia Opera Company’s Sweeney Todd was among the most technically precise and musically enjoyable shows I’ve ever seen, opera or not. True, a little extra vibrato, and a lot more breath support, reminds you that yes, you are watching an opera.

The score was provided by the excellent Virginia Symphony Orchestra, under the baton of Adam Turner, who has auspiciously begun his new tenure as Principal Conductor for Virginia Opera Company. And Virginia Opera Company retained the traditional supertitles that, in addition to being critical when watching an opera in German or Italian, also significantly improved my understanding of the text of Sweeney Todd. Thus, any “traditional opera” touches that the Virginia Opera Company imposed on Sweeney were quite welcome, and, the book (by Hugh Wheeler) being based on a Victorian melodrama, quite fitting for the genre.

Many moons ago, Director Ron Daniels co-wrote the stage version of Sweeney Todd that would eventually be transformed by Sondheim into the musical we know today. Perhaps because of his long history with the subject, then, Mr. Daniels staged his show in a manner that reflects deep intimacy with the subject matter. The principal roles are all expertly cast (more on that later), and the set design, by Riccardo Hernandez, is excitingly industrial, dominated by huge sheets of rusting corrugated steel. The proscenium is framed by a series of dressing room light bulbs ensconced in colorful swirls that evoke a turn of the century travelling freak show. Indeed, the whole production is resplendent with the trappings of a dark Victorian carnival, from the scary-clown look of the ensemble to the melodramatic harmonium music that plays such an important role in Act II. Like a bad horror movie that goes to the heights of ridiculousness while scaring the bejesus out of you, Sweeney Todd is entirely un self conscious about its “penny dreadful” roots, while maintaining its cold blooded menace.

The cast, as previously mentioned, is exquisitely cast and uniformly excellent. Stephen Powell is a brooding, powerful Sweeney, who manages to maintain the Barber’s bitter stoicism while being expressive and engaging. His twisted leading lady and partner in crime, Mrs. Lovett, is given an equally tremendous treatment by Phyllis Pancella, the highly industrious pie-maker  (of ‘The Worst Pies in London”) who nurses a stubborn affection for her murderous tenant. Both Mr. Powell and Ms. Pancella avoid the trap of caricature, instead singing their parts with a grounded humanity that belies their unthinkable acts, as in the the Act One ending “A Little Priest.”

Andre Chiang, as the young hero Anthony, performs his role with a rich baritone, as he sings a beautiful rendition of  “Johanna.” Meanwhile, as Johanna, the subject of every man in play’s love, Amanda Opuszynski is a perfectly adequate ingenue with a piercing soprano voice. As the self flaggelating Judge Turpin, Jake Gardner is the consummate Victorian aristocrat, rife with hypocrisy and hidden desires. Finally, Diana Dimarzio is a delightfully unhinged Beggar Woman, a role she has played several times in the past, including on Broadway opposite of Patti LuPone. 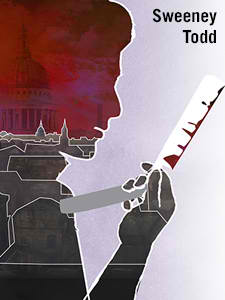 The lighting design, by Maruti Evans, is often interesting and occasionally brilliant, such as when he lights Signior Pirelli (played with charming falsetto by Javier Abreu) in a sickly green glow. The costume design by Emily Rebholz is engaging, if not particularly innovative, but the look of the ensemble is given a strong dose of Stephen King by makeup (and wig) designer James P. McGough.

After 40 years of bringing opera to the masses, it is reassuring to know that Virginia Opera Company continues to maintain the highest quality of vocalists, musicians, and designers. As the audience rose to its feet on opening night, optimism seemed to pervade the Concert Hall – not just about the future of the Virginia Opera Company, but of the whole future of opera in America.