Love, laughs, and suspense: you’ll get the full package at Prince William Little Theatre’s production of The 39 Steps. Adapted by Patrick Barlow from the early Alfred Hitchcock film, and directed by PWLT veteran Don Petersen, The 39 Steps farcically follows Richard Hannay as he is wrongfully accused of murder and tries to clear his name. The only way he can do so, though, is to expose a ruthless organization he knows only as “The 39 Steps.” His journey is hilariously treacherous, and he ventures across the Scottish moors from his home of London to evade the law. Hannay meets dozens of quirky characters, and three especially beautiful women, all of whom are played by three hard-working actors. All of this comes, of course, with more groan-worthy Hitchcock movie references than I can count. PWLT bravely stages this in the round, and allows an exaggerated play to be presented intimately, constantly involving the audience in the show.

Director Don Petersen wants to emphasize that this is “not a recreation of the early [1935] Hitchcock film,” and to bring out the “theatrical elements” in the play. He accomplishes this, accentuating anything and everything ‘theatrical’ about The 39 Steps. Petersen goes so far as to use blue painters’ tape to spell out “STAGE” on deck, and allows the audience to hear the stage manager’s time calls before the show and at intermission.

Petersen often overemphasizes the difference between theatrical farce and Hollywood spy thriller, though. He allows his actors to break the 4th wall such that the storytelling suffers, and permits small gags to drag on for minutes on end, slowing the overall pace of the play dramatically. He does, however, quite masterfully direct this play in the arena type setting. Mr. Petersen paints a lovely three-dimensional picture in every scene, for everyone to see: not an easy task. He also uses a wraparound balcony, built into the space, to stage a very creative penultimate scene in the first act. I would have loved to see this level used more often, as it adds an excellent dimension to the space.

Leland Shook has the privilege of portraying Richard Hannay, and does so with an impressive presence and a dry wit. Shook is romantic, funny, and multilayered, but most of all, he is a signature film noir front man, paying homage to Hitchcock perfectly. Shook certainly has the most consistent command of pacing and timing of the ensemble.

Erin Gallalee plays three characters, Annabella, Pamela, and Margaret, all of whom-in their own way-are our femme fatalles. Ms. Gallalee did an excellent job in differentiating her characters, and she makes bold choice after bold choice. When her timing was off, or switching into another accent didn’t click, and when a joke didn’t quite hit the mark, she didn’t shy away from the next one. She kept right on going into her next punch line or gag, often making it even larger than the last one. Her confidence and energy were  infectious.

Two of the most demanding and difficult roles in contemporary comedy are played by Allen McRae and Ellen Woodstock. Simply ‘Actor 1’ and ‘Actor 2,’ respectively, McRae and Woodstock play over 100 characters, and every one is distinctively different. Often in drag, the pair relish in this challenge; while their pacing and energy could be improved, they’re wonderfully unpredictable, and develop a chemistry throughout.

The set design, also by Don Petersen, is minimal and effective. Small pieces transform inventively to create different structures and vehicles. The number of locations in this play are dizzying, but Petersen handles this problem with ease.

The sound design, by Stan Harris, helps define location, too. An amplified splash into water, or a loud train whistle to transition from one scene to another makes sure the audience knows exactly where the actors are.

The lighting design by the team of Ken and Patti Crowley, are surprising. The style, direction, and all other technical elements of the play clearly dictate a film noir theme, but the lights differ from this idea. Colors habitually used are a black-light purple and a forest green, and rarely are there the classic long shadows usually associated with the genre. Chase sequences, to highlight the chaotic nature of Hannay’s journey, are used during idle scene changes. The strobe-like effect goes on for a time that begins to be physically straining to the eye, and removes the audience from the story. Maybe use some softer lighting for these sequences?

Susy Moorstein’s costumes are a standout of this production. Detailed when necessary, perfectly period, frequently funny, and always aesthetically pleasing, Ms. Moorstein’s vision is brought to a brilliant and colorful life in The 39 Steps.

The 39 Steps is quickly becoming a hit with community theatres, and it’s easy to see why here. In this over-the-top farce, with hints of mystery and intrigue, Prince William Little Theatre’s The 39 Steps is a fun time for everyone involved.

Running Time is 2 hours 25 minutes with one 15-minute intermission. 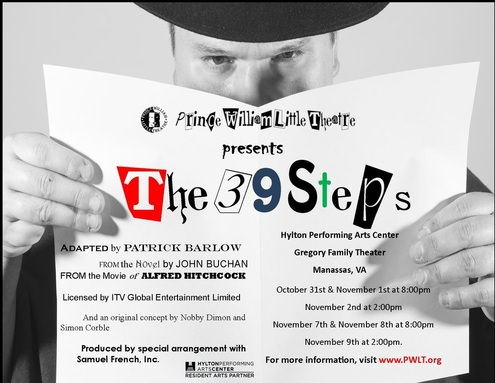 The 39 Steps plays at Prince William Little Theatre performing at The Gregory Family Theatre at Hylton Performing Arts Center – 10960 George Mason Circle in Manassas, VA. For tickets, call the box office at 888-945-2468, or purchase them online.