The main characters are corrupt, malicious and cruel. They use their attractive looks, charm, wealth, social status, and wardrobe to seduce (or rape), degrade and ruin the lives of those who’ve crossed them in the past. It amuses them.

It’s hard to take your eyes away. 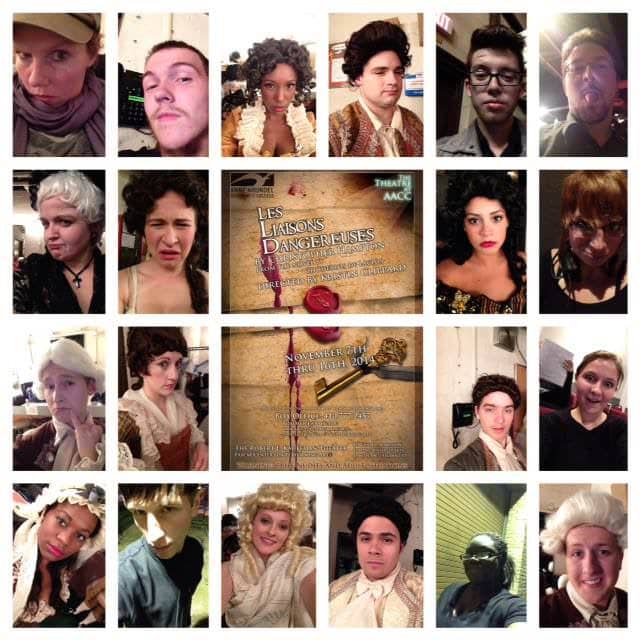 The Theatre at AACC is a gem – and has been one for years. That the community has not discovered this jewel in its midst is what in Yiddish is called a ‘shonda.’ A damn shame.

Opening night – this past Saturday – about 50 people turned out to see the show in a comfortable, state of the art theater that can easily handle 300.

The set, at first glance, is simple, yet elegant, and very creative.

A series of tall, semi-opaque panels or screens form a blocky letter “C” on stage. The two ends serve, behind the screens, as small boudoirs that appear and disappear during the show. The broad center section is at the center rear of the stage. Actors can be easily seen walking back and forth through this section, en route to the slender, towering main doorway which opens onto the main stage area.

At the very rear of the stage is a giant screen that serves to backlight every scene in vibrant tones of golden yellow, green, purple fuchsia and deep, vibrant blue. The frames holding the screens are gilded and embellished with lit scones and decorative gold medallions. The furniture onstage is, likewise, gilded wooden furniture, upholstered with golden brocade fabric. Between scenes, a pair of chaise lounges, chairs, a table and a dressing screen are moved about the stage by several bewigged servants to suggest the different residences of the main characters.

The servants, led by Major-Domo (Nick Brice), with two Footmen (Reed Sigmon and John Bell) and a Lady’s Maid (Shayna Richardson) have their own subplot, providing some needed comic relief from the viperous behavior of the lead characters.

In addition to the Set and Lighting Designer, major kudos go to A.T. Jones, the Costume Designer. The garments, wigs and accessories, for men and women alike, were sumptuous, elegant, and gorgeously accurate renditions of the decadent, pre-Revolutionary period in France in the 1780s.

Les Liaisons Dangereuses is Christopher Hampton’s adaptation of Pierre Choderos de Laclos’ epistolary novel – a series of letters between characters – published in 1782. The book was, apparently, a favorite of Marie Antoinette. The debauched lifestyle it depicted may have foreshadowed the discontent leading to the bloody French Revolution. It was first produced in the fall of 1985 by the Royal Shakespeare Company.

Two rival aristocrat-socialites – and former lovers – have selected some new victims for their amusement. The two ignoble royals use their power, wealth and influence to sexually prey on their victims. In the course of the play, through their machinations, several characters lose their lives.

Aladrian Wetzel owns the role of La Marquise de Merteuil. A Machiavellian character who can charm the breeches off of any man, she is angry a former lover plans to marry a virtuous, naive young woman, Cecile Volanges, portrayed by Veronica Somers, who has just emerged from a convent.

In the mix is La Chevalier Danceny (Miguel Valarino), a music teacher. Seeking revenge against her former lover, Merteuil employs Valmont to seduce the virginal Cecile. Valmont rapes her – and convinces the innocent Cecile he’s teaching her how to be a good lover for her future husband.

Cecile and Danceny fall in love.

Merteuil takes Danceny as her boy-toy. 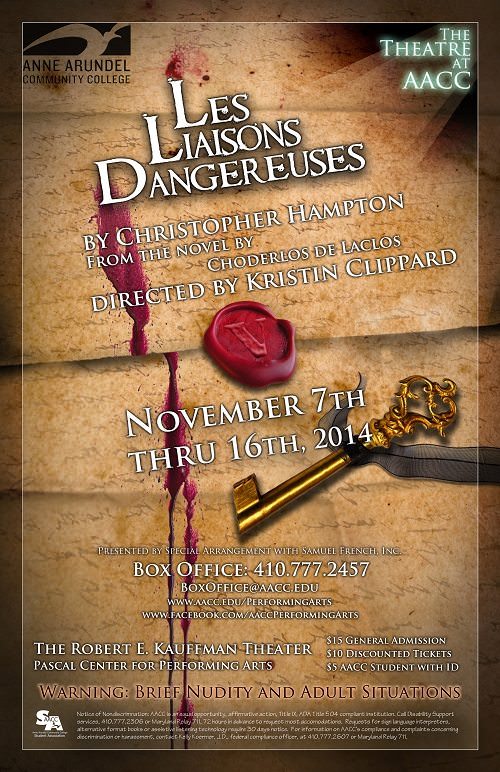 Wetzel, as Merteuil, has the DNA of a snake. She swishes her hoop skirt like a rattlesnake coils and readies itself to sink its venomous fangs into its victim. She exudes courtly elegance and a determined desire for revenge in the same breath. Her teeth snap like a steel trap when she talks.

As Valmont, Erik Alexis is suitably oily. His Valmont would hump a camel. He loses any audience members who might have held some attraction for his character when he informs Cecile, during one of his nightly “love teaching” sessions that he once seduced her mother – before Cecile was born.

Winding through this serpentine plot are letters. Letters written by various characters that come back to wound or blackmail other characters.

It’s hard to imagine, today, how letters could have such an impact – but, in the right or wrong hands, they are not much different from this generation’s social media storms.

Other members in this beautifully cast ensemble include Kat McKerrow as the elderly Mme. De Rosemonde, Leishka Jacome (Emilie), and Jack Venton (Azolan).

No matter how you classify this production – college drama production, or Off Off Broadway – this is an extraordinary, must-see effort production is theater at its finest.

Running Time: Two hours and 30 minutes, with a 15-minute intermission.