If you missed Compound 50/50 Productions Barbarellesque last year at the Wind Up Space or this summer at the State Theatre you still have two chances to catch the super fun, super sexy send up of Jane Fonda’s sexy, ‘60s space romp this Saturday at the Creative Alliance in Baltimore.  In the show there are four performers playing Barbarella.  I got a chance to chat recently with the four women play Barbarella – Cherie Sweetbottom, Maria Bella, Sunny Sighed and Kay Sera, and the Great Tyrant embodied by Missy Aggravation.

Lucrezia: Since I’ve interviewed Kay and Sunny before I’m going to start with Cherie, Missy and Maria and ask the questions I ask everyone – what got you into burlesque and how long have you been performing?

Cherie: I’ve been performing for most of my life. I have a degree in theatre – Sunny and I went to the same conservatory! – and I’ve been singing and dancing most of my life too. I saw a couple of burlesque shows at the beloved old Palace of Wonders (RIP!) and signed up for Reverend Valentine and Li’l Dutch’s mailing lists. I took their Capitol Tassels & Tease workshop in February 2011 and I made my burlesque debut in May 2011 as the “virgin sacrifice” at the Capitol Tassels & Tease one-year anniversary show. I was hooked. I love the creative freedom and I love that I can do as much or as little as my schedule allows. My tagline, “the Ambassador of Skin” came from a Sharkbite Sideshow gig I did in September 2013. Cardone, a magician from NYC, was hosting and because I was from DC he wanted to do a tie-in to the UN summit that was happening in DC at that time. It was such a good tagline I decided to keep it.

Maria: I was in NYC doing a photoshoot and the photographer I was working with asked if I wanted to him and a group of people going to a local burlesque show and I agreed. The second I saw Dirty Martini enter I was hooked. The power, confidence and sexuality exhibited by her was enough to make me want to run home, research burlesque and begin my journey.

Missy: As an undergraduate I studied performance studies centering on adaptation of texts and sexuality and gender performance. I took several years off of performing and when I came back to it, I realized that burlesque was the perfect venue for exploring issues of femininity and female power and sexuality.

Kay: And speaking of female power Barbarella was a very sex-positive and powerful woman!

Actually I was going to ask if you see burlesque as a feminist art form, followed by do you think there’s a feminist element to Barbarella?

Kay: I believe burlesque can be a feminist art form.  I’m not sure I’d say “is” because that’s an absolute. The performer is in power, she controls what is seen, when, how – even if.  There are no rules for body types, no ideals. Age, race, gender identity, sexuality … it’s all welcomed!

Cherie: Well it’s not considered “proper” for a woman to take her clothes off in public or to own her sexuality. Burlesque is all about owning it – as Kay mentioned, she (the performer) is the one in control.

Sunny: I think burlesque is an everyone-ist art form – burlesque excludes no one. It empowers the performers AND the audience and allows people to see sex and sexuality from a different perspective.

Maria: I feel like burlesque has caused some debate, but have found parallels between burlesque and the newest wave of feminisim in that women define feminism for themselves by incorporating their own identities into the belief system of what feminism is and we call out practices on patriarchy in our acts. And sometimes burlesque is not considered feminist and that is okay. Overall yes, I do believe in burlesque as a feminist art form. There has been a denial of feminine sexuality for so long and the desire to do what men want, and this is a business primarily run and attended by women. I feel burlesque provides an outlet for a celebration of women for women, as well as an opportunity for what women find sexy and empowering.

Cherie: Well she is a five-star astronavigatrix, so clearly she’s a smart cookie.

Kay: She was out exploring the galaxy by herself, fearlessly. When she discovered that physical pleasure could be taken from a man – and not just passively received from a pill – she was all over it! Barbarella knew what she wanted and wasn’t afraid to get it!

Maria: A small part of me felt like some scenes were misogynistic and that some of the victories were only won by Barbarella due to male impotence. But the larger part of me feels like the movie is about a sexually liberated female astronaut (being a female astronaut was a big deal back then in regards to the way NASA treated women) who is empowered. She does not cook, is not a stay-at-home mom and does not wait around for men, which truly challenged gender roles during that time.

How has the show changed/how is it changing from its debut at the Wind Up Space last year?

Kay: Mr. Gorgeous will be debuting an act. Pole Courter has joined us as Mark Hand

I hear he works hard for the money.

Sunny: I’m the lucky Barbarella who gets to climb all over BOTH of them!!

Cherie: I think it’s gotten much more polished since we debuted at Wind Up.

Kay:I agree with Cherie – we’ve had a chance to not only do it again, but to view our performances (via videos of shows) and enhance them.

Missy: And the sets have been wonderfully scaled to each venue.

Sets and video shout out to Richard Just!

Kay: And sound shout out to Bal’d Lightning!

Cherie:And flyer shout-out to Steven Warrick!!! He turned us all into illustrations of our characters!  So good!

Kay:I’ll be sending that flyer to the Burlesque Hall of Fame for its archives.

Cherie: I think we’ve all made costume and prop upgrades.

Sunny: And the performances themselves are more solid.

How did you decide who was going to be which Barbarella and who the Great Tyrant?

Cherie: Missy was a shoe-in for the Great Tyrant from Day One.

Missy: I got first dibs. Kay, Cherie and I took the characters (or stages of the characters’ development) that most resonated with us and our abilities and looked at what was left and tried to think of the best person to fulfill them.

Kay: Cherie has a sweet coyness about her (if I may say so) which made her a natural for the innocent Barbarella.

Cherie: I also claimed Dildano pretty early on, so if I was going to be a Barbarella I had to have time to change … genders.

Kay: Maria’s rock-n-roll fun with tongue in cheek humor so perfect for chompy dolls. When you need to make a blind man see you’ve got to make yourself heard and who’s that gonna be but Sunny Sighed? And me, well I’m weird. And getting attacked by birds and nearly …uh … loved to death by a machine? Weird.

Please complete the following sentence: If I wasn’t a burlesque performer I’d be ____.

Kay: Crying into a bowl of soggy Cap’n Crunch

Sunny: If I wasn’t a burlesque performer I’d be bored.

Kay: I think you said whored.

Cherie: Going down waterslides at Brightest Young Things pool parties topless with their logo stickers on my nipples as pasties. I actually did that once but now I get to show my boobs professionally.

Kay: There have been fan requests for other sci-fi or camp sendups – Zardoz, Flash Gordon – but right now our focus remains Barbarellesque. It’s an intensive show with a large and terrific cast, and with two shows back to back it’s going to be amazing!

Missy: Barbarellesque came up so organically and we’ve all put so much energy into it, it’s going to be hard to top as an ensemble strip show.

Kay: Given the dorkiness of our production team and cast, something else foolishly fun seems inevitable.

Missy: We are all huge nerds.

Kay: But I do think it would have to be something  not just silly or “familiar.” Barbarellesque didn’t come about just because it’s so deliciously ripe to bursting with unintended humor. Her strength and joie de vivre really did strike a chord.

Missy: It was just asking to be burlesqued.

Cherie: Didn’t it come about partly because I hadn’t seen the movie and the rest of you were like, “What? We must remedy this!”

Kay: Yes that was a SIN that you hadn’t seen it! So getting a bunch of creative dorks in a room together with a film of such creative wackiness something was bound to happen. Now 45 years later it’s recognized as having created imagery that continues to influence pop culture. The New York Times which dismissed the film back then as “a special kind of mess” later called Barbarella “the most iconic sex goddess of the ‘60s.”

I think we got it. Anything to add?

Missy: Yes, this is a theatrical show so there is a plot and a theme and it all makes sense … well as much as Barbarella ever does.

Kay: If you like burlesque, sci-fi, theatre, musicals, boylesque … there is something for everyone. Except the kiddies.  Nothing for the kiddies.

Kay: Or you risk shattering the loving union of the Universe!

Cherie: And why would anyone want to do that? 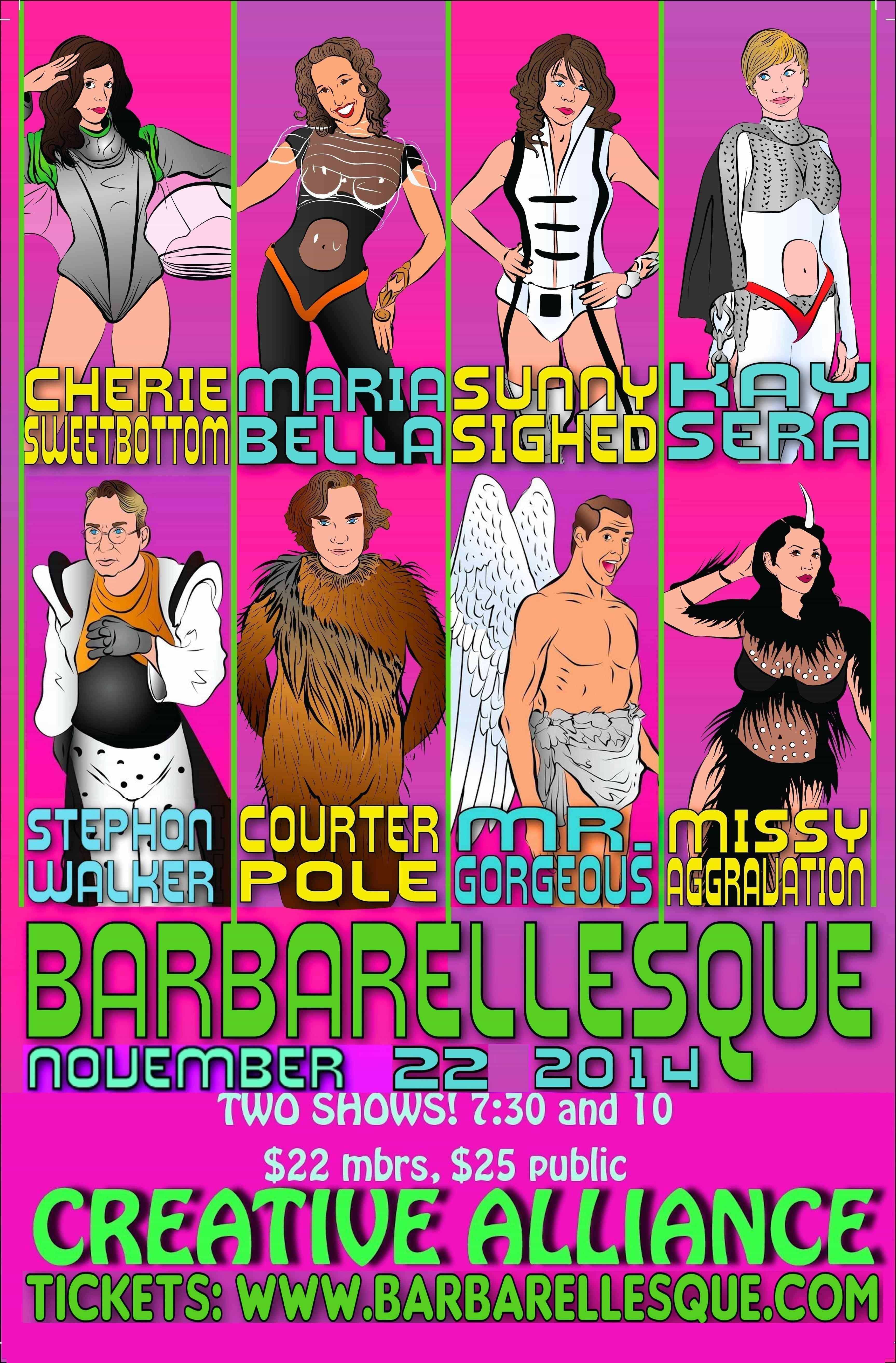 Barbarellesque plays for two shows at 7:30 and 10:00 PM, Saturday, November 22, 2014 at the Creative Alliance – 3134 Eastern Avenue, in Baltimore, MD. Tickets available at the door and online. Advanced ticket holders will be entered to win a limited edition hardcover edition of the Barbarellesque comic by Jean-Claude Forest.