Eight hundred eagerly-anticipated bottles of George Washington’s limited edition Peach Brandy Eau de Vie (translation: “water of life”) went onto the shelves of the Mount Vernon Estate gift shop just in time for Christmas. Produced at the restored distillery this huge undertaking dwarfed Washington’s eight gallons in sales recorded back in 1798, reflecting a more than two-century price increase from $1.00 a gallon to a considerably adjusted $150.00 per 375ml bottle.

It’s an elegant pour, meant to be sipped, and one Washington didn’t expect to be chug-a-lugged. Not exactly a teetotaler himself, he wrote a letter to an employee, whom he both chastised and cautioned for drinking excessively.

When it first opened in 1798, the distillery was run by a canny Scotsman, James Anderson, and his son John. James had convinced Washington to produce whiskey later introducing the eau de vie, which are made today according to the early recipes. Producing 11,000 gallons of whiskey in its heyday, it became the largest distillery in America, providing two distinct grades of whiskey, which became available throughout the country, including in Alexandria’s many taverns.

Thanks to the efforts of archaeologists who discovered the foundations in 1997 and working off a grant from the Distilled Spirits Council of the United States, the distillery was restored in March of 2007 after being destroyed by fire in 1814. Following ten years of research and construction, the distillery now produces one hundred gallons of rye whiskey in small batches twice a year. Brandy is made every other year.

Both are made the old-fashioned way using 18th century distilling techniques. Workers hand-cut up to 51 cords of wood per month to stoke the direct wood fires beneath the still, and giant wooden paddles are used to stir the mash, which then is transferred to a series of hogsheads. “Manning the paddles is like steering a cement canoe down the river,” says Mount Vernon’s Master Distiller Steven Bashore.

To achieve 300 gallons of whiskey, 8,000 pounds of rye, corn and malted barley from grains are sourced from Virginia farms. Locally grown Virginia peaches become the base for the Peach Brandy Eau de Vie that George and Martha served at the mansion. Ledger entries from 1798 show sales of eight gallons to the public. But by 1799 with production in full swing, the First Couple were graciously serving 60 gallons of the precious peach elixir to their many guests.

To recreate this “new” product two of America’s leading brandy distillers were brought in, Ted Huber of Starlight Distillery in Indiana who procured five 55-gallon drums of very fine peach juice, and Thomas McKenzie of Finger Lakes Distilling in New York. Both men assisted Bashore in the production and bottling of the historic brandy, which has been described as having tasting notes of candied peaches and peach cobbler with a hint of cinnamon and which I can personally attest to.

Dedicated in 2007 by Britain’s Prince Andrew, the reconstructed distillery featuring the distilling process “from seed to still” is open to the public 365 days of the year. Located at 5513 Mount Vernon Memorial Highway, in Alexandria, VA 22309, the distillery is three miles south of Mount Vernon Estate and Gardens. For hours of operation go to their site.

To get you in the holiday spirit, or spirits as the case may be, here is a recipe for Martha Washington’s Rum Punch. 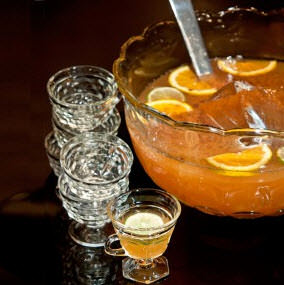 In a container, mash the orange, lemons, cinnamon sticks, cloves, and nutmeg. Add the syrup, lemon, and orange juices. Pour the boiling water over the mixture in the container and let cool for a few minutes.

When cool, add the White Rum, Dark Rum, and Orange Curaçao [You may substitute for Peach Brandy]. Strain well into a pitcher or punch bowl (to remove all of the spice marinade) and serve over ice in goblets and decorate with wheels of lemon and orange.

Dust with a little nutmeg and cinnamon and enjoy a sip of American history.