A packed house at the Phillips Collection could have been forgiven if they thought that pianist Einav Yarden had magically switched out Steinway grand pianos between numbers.

The Israeli pianist, making a return to our region since her days studying with piano legend Leon Fleisher at Baltimore’s Peabody Conservatory, brought her growing international reputation for drawing remarkable contrasts and connections among dissimilar parts of the piano repertoire to Phillips in its Sunday Concerts series.

Ms. Yarden began her program with Bach’s English Suite #2 in A minor. It’s a seven-part work that employs various stock forms of 17th and 18th-century dances to spin out a large variety of melodies and countermelodies.

She then continued with about as big a contrast as a pianist can offer while staying within the idea of a dance inspiration, with a set of eight free-form waltzes by early 20th century French composer Maurice Ravel called Valses nobles et sentimentales. The Ravel suite offers a bounty of complex harmonies teased out of mild dissonances, with melodies either discovered in a playful skitter across the length of the keyboard or, more often, lifted out of a cushion of ethereal sound clouds.

No two works could offer more of a contrasting challenge in presenting their main themes. The Bach requires absolute note-by-note articulation of the piano keyboard while the Ravel waltzes require the piano to set an almost orchestral background behind its melodies.

Key to Ms. Yarden being able to do both with the same instrument is her uncanny mastery of the sustaining pedal. Unlike even some renowned pianists, she absolutely never “cheats” in very fast passages by smearing notes together with the pedal. Thus the Bach suite had the quality of space in between even rapidly running notes, especially in fast dances like its “Courante” and “Gigue” movements.

Yet the Ravel waltzes on the same piano had the magical quality of sustained background chords, with each notional “melody” – often really a set of notes or note clusters linked across various registers in the piano – clearly presented in phrases pulled together by the pedal for no shorter nor longer than was required to isolate them.

As soon as Ms. Yarden began the second of the eight Ravel waltzes, marked Assez lent avec une expression intense (or “Fairly slow with an intense expression” but let’s face it, it sounds better and more meaningful in French), the piano in the Phillips’ Music Room seemed to have completely transformed from the harpsichord-like quality of Ms. Yarden’s Bach rendering to the dreamy, almost orchestral world of Ravel. In fact, while originally written for piano solo, Ravel eventually orchestrated Valses nobles et sentimentales and it will be performed as such by the Baltimore Symphony Orchestra on March 22, 2015 at The Music Center at Strathmore. Of course the BSO will have the help of full strings to set the Ravel atmosphere! 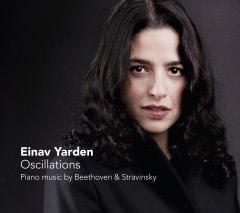 In combining this striking articulation with dramatic mood changes in live performance, Ms. Yarden continues a trend she set in her 2013 debut album called Oscillations. The CD gyrates between the music of two other well-known but hardly-ever-linked composers – Ludwig van Beethoven and Igor Stravinsky. On the album she presents two early Beethoven piano sonatas notable not only for their grace but also for their humor – one of them ends with a three-note flick off the bottom of the piano keyboard that sounds almost like a joke – and Ms. Yarden’s sparkling articulation almost jumps off the disk.

In between she eases listeners into the sometimes challenging music of Stravinsky with a fairly accessible 1924 sonata of his own. Then she eventually presents more thematic and out-of-the-box Stravinsky notions with one of his miniatures literally called Piano-Rag Music (which sounds a bit like a comically distorted Scott Joplin rag) and another labeled simply Tango which is actually rather ambitious. At the Phillips on Sunday, Ms. Yarden delighted the audience by playing Piano-Rag Music as her encore.

Before she got there, though, Ms. Yarden closed the main part of her program relatively conservatively, with a four-movement Sonata in G Major by Franz Schubert, a rough contemporary of Beethoven’s. Probably the fact that this sonata also relies on a certain degree of folk tunes, minuets and other evocations of the Austrian countryside linked it with the dance-inspired nature of much of the rest of the program.

Ms. Yarden again notably pulled the singing melodies out of the sometimes thick agglomeration of notes as the Schubert sonata proceeded. Whenever she returns to Washington, perhaps the Phillips (or other) audience will get to hear live more of her daring, percussive 20th century inspirations beyond the dreamy world of Ravel. Since completing her master’s degree from Peabody in 2005, Ms. Yarden has successively lived in New York and, now, in Berlin, with a concert schedule that will bring her to St. Louis next March after numerous appearances in Europe and her native Israel. One suspects her musical horizons will be as broad as her travels.

Running Time: 1 hour and 45 minutes, with one 15-minute intermission.