It’s my favorite holiday concert and again this year I attended National Chamber Ensemble’s Annual Holiday Concert on Sunday, December 14, 2014. It was one heck of a fun sleigh ride filled with works by Bach, Dvorak, Tchaikovsky, and Leroy Anderson, and others, performed with much love by fabulously talented and joy-filled musicians from age 10 and up. 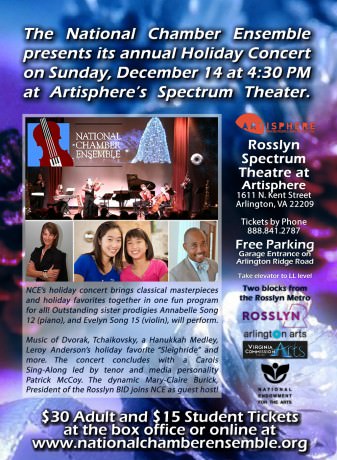 The concert opened with Tchaikovsky’s The Nutcracker Mini Overture and March (arranged by Lynne Latham) followed by Leroy Anderson’s popular ‘Sleigh Ride’ It immediately filled the intimate Spectrum Theatre at Artisphere with the holiday spirit. Mary-Claire Burick, President of the Rosslyn Business Improvement District was the delightful guest host.

Through the magic of YouTube let me take you into the concert and watch some highlights of this festive performance. These videos and musicians tell the story better than I ever could.

Two sisters-12 year-old pianist Annabelle Song performed Bach’s Piano Concerto in F minor with great confidence, while sister Evelyn Song, who is 15 and a superb violinist, performed Duets by Shostakovich for Two Violins with National Chamber Ensemble’s Artistic Director Leo Sushansky. You could see that they really enjoyed playing this beautiful composition together.

When Evelyn had the solo spotlight there was a lot of passion coming from her bow as she breathed fire into Wieniawsky’s Polonaise in D Major. She was accompanied by Natasha Dukan on piano, who accompanied several of the musicians throughout the concert..

And the highlight of the concert ended the first half of the concert when 12 young violinists from age 8 to 21 joined the National Chamber Ensemble for a rousing performance of the Bach Double Concerto: Keyboard Concerto in F minor and Concerto for Two Violins in D minor-Vivace. It was a sight to behold – pure teamwork! I loved watching the youngest musicians play. I was kvelling!

And there was a beautiful Chanukah medley so me and my fellow Chanukah celebrators would yearn for some Latkes and a game of dreidel.

Also contributing to the performance was Pop rock guitarist Andrew Pal whose electric guitar shimmered through Christmas Eve/Sarajevo and Wizards in Winter, by Paul O’Neill and Robert Kinkel and arranged by Bob Phillips, as performed by Trans-Siberian Orchestra

And although most people attended this concert for the music and the wonderful performances, I attended for other reasons. My friend Leo Sushansky and I share a common goal-to inspire young musicians and actors and lovers of music and theater and the arts. And when I saw all those young musicians playing together my heart melted and I felt so proud of what Leo has accomplished with this amazing National Chamber Ensemble and the love for music that he has passed on to this new generation of musicians. It was so heartwarming watching all the hugs and hi-fives that took place at the post-performance reception. I’m still smiling

Happy holidays and a happy and healthy and music-filled 2015!

The National Chamber Ensemble is supported in part by the Arlington Cultural Affairs Division of Arlington Economic Development and the Arlington Commission for the Arts.

An Interview with National Chamber Ensemble’s Leo Sushansky on Their May 10th Mother’s Day Concert by Jane Coyne.