No matter how low your spirits these days, Angela Lansbury will raise them. That’s the professional promise now drawing people into Washington, D.C. from all over the Mid-Atlantic region to catch one of the final performances of Blithe Spirit at the National Theatre.

It’s noteworthy that this SRO North American tour has chosen to end at the National Theatre. The National is where Angela Lansbury made her first pre-Broadway stage debut in Hotel Paradiso 58 years ago, playing Bert Lahr’s wife. Now 89, Miss Lansbury is a national treasure in more ways than one.

Casting her as Madame Arcati, the lovably eccentric medium in Noel Coward’s 1941 comedy, seemed almost too pat back in 2009 when the revival opened on Broadway. After winning acclaim as a wide succession of eccentrics, from Mrs. Lovett (Sweeney Todd) to Mrs. Potts (Beauty and the Beast), could Lansbury have anything to add as Madame Arcati? She could and did, and it earned her a fifth Tony Award.

At this point, anyone expecting her to just “phone in” her performance is sadly deceived. And as Noel Coward says in Blithe Spirit, “It’s discouraging to think how many people are shocked by honesty and how few by deceit.” Now there’s a line that seems cozily at home in Washington, D.C.

For an object lesson in milking a part for laughs, watch Lansbury gather herself together for a seance and prepare for her trance. Her shoulders twitch, her head ratchets, she pokes random fingers at invisible targets as she clops across the boards in fits and starts like a conflicted Egyptian priestess. Any ghostly apparition found entering the room after that demonstration could not appear half as supernatural.

Theater-goers today are most likely to have caught Blithe Spirit in some high school auditorium or community theater. It is a revelation to see it fully back in professional hands, with actors who focus our attention on the characters’ inner psyches and not on the play’s ectoplasmic distractions.

Angela Lansbury’s powerhouse comedy aside, this staging by Director Michael Blakemore understands that the character Charles Condomine is really the center of the play. When the spirit of Charles’ deceased wife Elvira is inadvertently summoned from “the other side,” we must feel his discomfort as he is caught more and more between the free-spirited Elvira and Ruth, Charles’ present rigid and insecure spouse.

British actor Charles Edwards proves a comical delight as Charles, who starts out so suavely composed and sure of himself until these two very different-seeming wives team up to accuse him of having a “weak will.” Edwards shows us the funny side of male vanity, flayed and dissected through the genius of Noel Coward. Call it the deconstruction of an English stick-in-the-mud.

Charlotte Parry delivers the most sympathetic portrayal possible of the harsh and controlling Ruth. Parry helps us see exactly why Charles was attracted to her and her sense of orderliness after living five years with the unbridled Elvira.

And speaking of visions, Melissa Woodbridge as the platinum blonde beauty Elvira certainly qualifies as one. Woodbridge flits about the Condomines’ Kent living room all evening, winning more than her share of laughs and stealing attention everywhere she lands. She makes an unlikely but irresistible blend — an angel in flowing white gossamer veils as well as a naughty coquette in a mere silken slip of a negligee.

Excellent support is provided throughout by Simon Jones and Sandra Shipley as the older and supposedly wiser Dr. and Mrs. Bradman. And Susan Louise O’Connor proves another audience favorite with her background contortions as the scatterbrained parlor maid, Edith.

The living room set designed by Simon Higlett is attractive and unusually substantial, from its bleached wooden wainscoting and massive doors, to its tall, breeze-tossed curtains and exposed ceiling beams. Don’t be surprised if parts of it are animated into action when Charles’ well ordered world collapses.

Lighting by Mark Jonathan and the sound by Ben and Max Ringham are all they should be, with never a halt in the action nor a nuance left undetected. The scene changes are made into an occasion for rejoicing by the projected title slides of Coward’s coy stage directions and the period songs especially recorded by Tony Award winner Christine Ebersole.

British wit is one of the fine things in life better left to professionals. This wonderful reintroduction to Blithe Spirit could be called exhibit A. And by A we don’t just mean the one and only Angela.

Running Time: Approximately Two hours and 20 minutes, with one intermission. 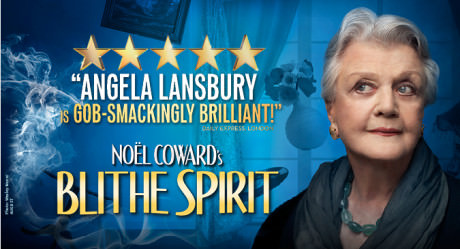 An Interview with Charlotte Parry of ‘Blithe Spirit’ at The National Theatre on DCMetroTheaterArts.

An Interview with Melissa Woodbridge of ‘Blithe Spirit’ at The National Theatre on DCMetroTheaterArts.