The crowd that came to The Birchmere last night to See Jane Sing! got a great big ol’ cabaret show full of offbeat tunes and upbeat fun. Jane Lynch wowed ‘em with her artful blend of agile song styling and ascerbic wit.

Opening the evening was a terrific jazz band, the Tony Guerrero Quintet, playing a 15-minute set that included a lovely medley from West Side Story (a nice nod to all the musical theater fans in the house). Drummer Matt Johnson was a bongo-savant standout. Another cool surprise was band leader and trumpet player Tony Guerrero’s rendition of “When You’re Smiling,” which he sang in an appealing Louis Armstrong–like rasp.

Tim Davis, known for arranging six-odd years worth of vocal numbers on Glee, crooned some mellow standards, “Come Fly With Me” and “The Very Thought of You,” then treated the audience to a song Guerrero wrote for ESPN, which had asked for something Sinatra-like about love and golf for a television commercial. Though the song Guerrero came up with, “Take Another Swing at Love,” never aired, Davis made it sound just like something  wonderful from the catalog of ‘Ol’ Blue Eyes’  hits.

Jane Lynch took the stage—in a smart black pantsuit befitting her elegant stature—and lost no time wisecracking about how happy she was to be performing on the legendary Birchmere stage “a stone’s throw from the Auto Zone.” The audience enjoyed her skillful stylings of “I’d Climb the Highest Mountain” and “If Wishes Were Rainbows” and then did a double-take en masse when she sang a hilariously sapphic song about “slapping the case” (“she was on her toes, I was on my knees”). The audience, among whom same-sex couples were well represented, pretty much went wild.

Lynch was joined by Kate Flannery, who plays a lush on The Office and whose pipes and comedic skills perfectly complemented Lynch’s. Together they sang “Mr. Monotony,” a little-known Irving Berlin ditty, and a gorgeous arrangement of “Far From the House I Love” from Fiddler on the Roof. They then sang “Blood on the Coal,” a faux-hootenanny Folksmen song by Christopher Guest, Michael McKean, and Harry Shearer from the film A Mighty Wind.  As Flannery gesticulated like a giddy cheerleader, Lynch tried to sober her sotto voce, “People died!” It was a hoot.

Another highlight of hilarity was a medley of classic but maudlin love songs that Lynch sang solo. Lynch punctuated the sexist undertones in each as she portrayed one selfless, lovesick female character after another abjectly longing for the man of her deluded daydreams. The satire was  pitch-perfect and priceless. 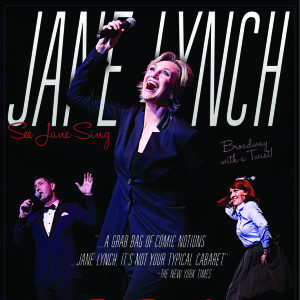 Just when the evening couldn’t get any funner or funnier, Lynch and Flannery sang “Something Stupid,” a song originally sung by Frank Sinatra and his daughter, Nancy Sinatra. In the prefacing patter, Lynch casually made clear that though she and Flannery go back decades they’re not, you know, lovers or anything. That set up what became a laugh-out-loud episode during which each time the lyrics intimated a relationship of affection, Flannery and Lynch would avert their eyes and abruptly turn away from each other. The gag kept running and killed.

Suddenly, it seemed, Davis, Flannery, and Lynch were singing “The Party’s Over,” as indeed it soon would be, after several encores. It had been, as Lynch promised it would be when I spoke with her earlier, a blast—a complete and satisfying cabaret act. Plus it had been a chance to see Lynch take the stage and hold a live audience with even more sass and pizzazz than onscreen.

“See Jane Sing!”: An Evening With Jane Lynch has one more performance tonight at 7:30 PM at The Birchmere Music Hall – 3701 Mount Vernon Avenue, in Alexandria, VA. For tickets, call Ticketmaster at (800) 745-3000, or purchase them online.

LINK
Magic Time!: ‘A Fan Chat with Jane Lynch’ Who is Birchmere-Bound on March 24 and 25th.