Young Playwrights’ Theater’s 2015 New Play Festival marks the culmination of the hard work of the student playwrights, whose works were selected for the festival, the professional actors performing the plays, and the directors who mounted the plays, as well as the inspired and tireless efforts of the Young Playwrights’ Theatre staff. Monday, April 20th’s roster of plays included The Trip to the New World by Aijah T. Royal, The Bacon’s Revenge by Rachel Masterson, The Tiger and the Mouse by Jabari Hicks, The Confusion of Being in the Army by Ja’Neza Andrews-Washington, Empathy vs. Appetite by Aoife Butler, and Silver Samurai by Armando Abarca-Salvador.

While this piece speaks to the first evening of the festival, since I was in the ensemble of the elementary school evening’s plays, you can still see the middle school and high school plays TONIGHT, April 21st and TOMORROW, April 22nd, respectively. I highly recommend checking out one or both evenings of work, because not only will you be entertained, you’ll be inspired by the honest self-awareness and authentic risk-taking of the wonderful student playwrights. 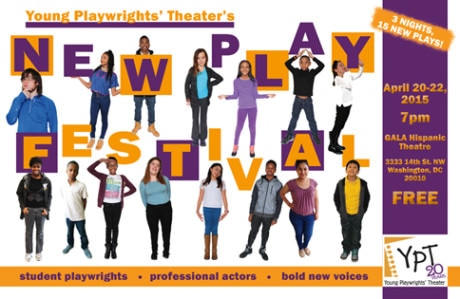 The process in mounting our evening of plays followed the trajectory of the professional theatre schedule. At the end of March, the playwrights, actors, directors, and YPT staff sat down for a first read through of each of the plays. The ensemble of actors (Christine Alexander, Luke Cieslewicz, Jonathan Palmer, Amal Saade, Dawn Thomas, and myself), met the directors (Cecilia Cackley, Ryan Maxwell, and Catherine Tripp), and the student playwrights (Armando Abarca-Salvador, Ja’Neza Andrews-Washington, Aoife Butler, Jabari Hicks, Rachel Masterson, Aijah T. Royal), whose creative energies were the reason for the season.

Each playwright was able to give everyone in the room a little back-story behind their inspiration for the play. Followed by the read-through of each play, the family members of the playwrights, the directors, and actors were able to respond to the work with things they liked about the plays, things that surprised them, etc. At this point, the playwrights were also able to make final changes to their plays, before the plays went into rehearsal.

For the next three weeks, the playwrights put their award-winning works in the capable hands of the directors and the actors. Our six plays were so unique and inspired, that our ensemble and directors were given the tasks of creating a dragon onstage with four actors’ bodies, bringing the world of an iPhone app to life, and deciding how bacon would walk and talk, to name a few. The dialogue between the artists in the rehearsal room and the playwrights was not over.

During rehearsals we came across questions, either about the wording of lines, or a line or two we wanted to add for clarity, or a question about the personal experience that went into the play and how it should be played out in a moment, and we would email said questions to the playwright, for their consideration. The collaborative aspect of theatre was ever present in this process, which activated and elevated the work of the student playwrights that much more.

It was during the rehearsal process that I became in awe of the six playwrights, what with their abilities to use a genuine blend of real-life and imagination as the spark of creation for their plays. 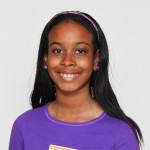 Aijah T. Royal used an app on her iPhone to inspire her play, creating this very “of-the-moment” play from a favored pastime she shares with friends at school. 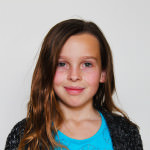 Aoife Butler used a recess game she would play with friends as the inspiration for her play. 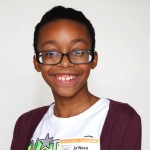 Ja’Neza Andrews-Washington used her brother’s experience in the Marines to inspire her play, and created beautiful monologues for her characters, exploring the inner push one may feel to enlist versus the external pull from loved ones to stay out of harm’s way at home. 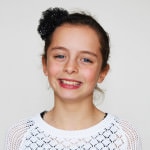 On the opposite end of the spectrum, Rachel Masterson used her love of bacon to propel her to write a play about bacon plotting against the humans who eat them. 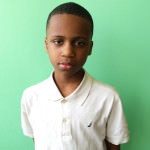 Jabari Hicks wrote his play about an unlikely friendship between a tiger and a mouse, which ended in a tiger-mouse dance party. 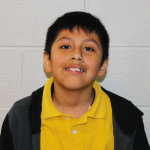 Armando Abarca-Salvador wrote his play about an incident with an amulet, which releases a dragon who tries to take over Japan, and the unassuming samurai who must defeat the dragon.

As our final rehearsal before entering into our day of technical rehearsal and performance, our playwrights were back in the rehearsal room with us. This gave the playwrights to see the direction(s) we headed with their work, respond to what they saw, and dialogue about any questions we came across during the process.

While costumes were saved for tech/performance, the props were in full swing for this run-through, giving the playwrights a more full idea of the plays. The notes we received from the playwrights were insightful, ranging from the performance of a particular character, to ideas about the sequence in which characters enter, or what physical actions they believed a character would or would not do. The spirit of this particular rehearsal, and the open energy of everything YPT does allowed for the power of creative collaboration to take hold of everyone in the room.

As we fast-forward through a smooth day of technical rehearsal, the performance of the plays was set up as follows: prior to their play being written, each playwright came onstage and gave a short speech. They introduced themselves, as well as their plays, and gave the audience some insight into their personalities. Favorite pastimes were discussed, as well as one thing they would change about the world. My favorite aspect of each of their speeches was their response to the question, “What advice would you give to your peers who wanted to write a play?” Each of our playwrights echoed sentiments I had felt from reading and rehearsing their plays for a month. Following your inspiration and not worrying about “perfection” was a common theme, as well as the idea of creative ownership and writing the play you, the playwright, want to write.

In her opening remarks to the audience, Brigitte Pribnow Moore, Executive Director of YPT, quoted a speech Michelle Obama gave to a room of students Moore had brought to the White House for a poetry event. Moore gave spectacular emphasis to a remark Mrs. Obama made about the idea that the arts give children a reason to wake up in the morning. In my adolescence I definitely fell under that category, and still do to this day, and to a certain extent everyone involved in this evening of work, from the student playwrights, to the directors, to the actors, and YPT staff do as well, I am sure. Not only did this evening of new plays celebrate that sentiment, but everything YPT does celebrates that sentiment as well.

The event is free to the public, but seating is first come first served, so leave yourself some time to ensure you secure a seat for an evening of entertainment and inspiration.