The inaugural season of the Northern Virginia International Film Festival, at the Angelika Film Center in the vibrant, youthful Mosaic District of Fairfax County, just wrapped up. Fernando A. Mico, Festival Director, aspired to create a local film festival to bring “a slice of Hollywood in Northern Virginia” for local and independent film makers and audiences.

“We wanted to bring a corner of the arts and entertainment world that is, in our opinion, underrepresented in Northern Virginia.” said Mico. In an interview, Mico described his clear goal to “provide an opportunity for film makers and screenwriters to have their cinema work available and screened before audiences who would not have the opportunity to view them without the Northern Virginia festival.”

When I asked how the nearly week-long festival went in its inaugural season, Mico was quick to respond, “This year was a smashing success! And next year we’re going bigger and badder! We plan on a 10 day festival and we are bringing music to the festival as well!”

This year’s Northern Virginia (NOVA) International Film Festival not only had film screenings, but forums by leading professionals on topics including crowdfunding. Crowd-funding is becoming of greater significance to creative artists no matter what their field of artistry and those in non-profits as well as the old modes to seek-out funding have been affected, if not curtailed, since the great recession of several years ago and the subsequent Federal Government budget sequestration.

As I continue with developing features, previews, and reviews of local performing artists and performing arts companies, I have made clearly aware of consternations about funding.

This column highlights conversations with two film-makers at the Film Festival with Northern Virginia roots.

Kiley Kraskousak, from Falls Church, Virginia and President of Thinking Forward Media, screened The Last Song before the War, a film she co-produced. It is a feature-length documentary based upon her road trip to the legendary Timbuktu, Mali with her co-producers to record Grammy Award- winning musicians playing in the dunes of the Sahara. The Timbuktu festival has been silenced since 2012, with the destabilized conditions in that part of the world.

The Last Song before the War received early funding from crowd-funding and then from the National Endowment for the Arts. Kraskouska also lead a panel about crowd-funding “which has revolutionized the funding landscape and access to capital for everyone. It has democratized funding opportunities”.

According to Kraskousak, creative artists are expanding their efforts with crowd funding. Asking for money is never easy. “They are learning to tell a story, creating curiosity about their projects and progress to reaching a goal.” She went on to say, that in crowd funding efforts, “it is critical to tell a story, to give people something to root for, and have excitement with your project’s campaign”.

Executive Producer Charlotte Larsen screened the full-length film Lost Angels. Larsen is an actress and producer who now resides in Los Angeles, by way of New Zealand, the United Kingdom and the United States. She has Northern Virginia roots, having lived in Burke, VA for about three years. Larsen was trained at New York Film Academy (LA) and the Stella Adler Academy of Acting – Los Angeles where she now sits on the advisory board. Not long after graduating from college, she knew what she wanted to do and set on her path. She began her own production company called Random Films, as well as Propeller Studios.

Directed by Stan Harrington, Lost Angels is a movie about music that explores a journey of two 20-something former lovers through the dense labyrinth that is Hollywood. It is a place where power and fame are powerful, yet hardly easily attainable goals that can make love and sincerity, “not just casualties but often inconvenient”. While the movie takes place in Los Angeles, the issues raised are “universal” added Larsen. “It is about sacrificing one’s soul and giving up on love to try to ‘make it.’”

Lost Angels received several awards at the NOVA International Film Festival including for Best Score for Oliver Pigott. Singer/songwriter Pigott, a former ”Canadian Idol” semi-finalist, has a featured role in the film as well. “Oliver is an incredible talent and his music is what the film revolves around and was written for.”

Next for Larsen is “getting the film out there more – festivals and hopefully someone will pick it up for distribution!” 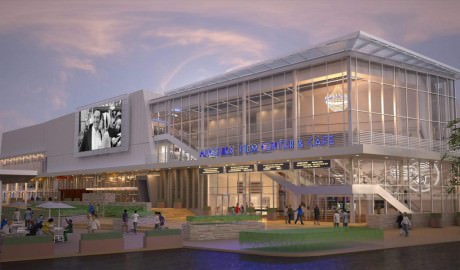 The Northern Virginia International Film Festival was geld April 13-19, 2015 at the Angelika Film Center and Café at the Mosaic – 2911 District Avenue, in Fairfax, VA. For information and to keep up-to-date about the 2016 Festival visit their website.