Jacques Brel is Alive and Well and Living in Paris. And, for the month of May, he’s alive and well at the Audrey Herman Spotlighters Theatre, too.  Jacques Brel is “a musical revue of romanticism and cynicism, world-weariness and jaunty whimsy set in a European Carnival!” More specifically, it’s a cabaret, featuring the songs of Belgian singer-songwriter Jacques Brel (1929-1978), which have been translated to English by Eric Blau and Mort Shuman. There is no overarching plot. Instead, Brel’s songs are presented as vignettes, self-contained stories with their own unique choreography, costumes, and set changes.

Director and Choreographer Timoth David Copney has managed to cast a wonderful group of singing actors who wring every drop of pathos and humor from their songs. It’s a small cast; seven people in total. Kerry Brady, Mallorie Kristoffersen, Darren McGregor, Connor Moore, Lauren Schein, Michael Tan, and Beth Weber share the stage and don roles and moods as quickly as a lighting change. Good singing was universal, though some voices stood out beyond the rest: Kristoffersen and Moore in particular gave powerful, soulful vocal performances Friday night that had me dropping my pen and soaking it in, though it’s fair to say that everyone had showstopping worthy moments.

Everyone also suffered a few moments of pitchiness, which were jarring amidst the beauty of the music. But giving due credit to the cast and crew, those moments were few, far between, and more than compensated for by every other aspect of the performance. Darren McGregor was a prime example of this. He seemed to have trouble hitting some of his notes, but that didn’t stop him from turning in an amazing performance. In fact, his rendition of “Amsterdam” was one of my favorite moments in the entire show.

Alan Zemla has once again outdone himself with the set. The stage looked like a gazebo or park pavilion, with ivy, arches, and benches wrapping around the four pillars of the theater, and the surrounding areas designed to resemble a carnival. There’s a ticketing booth, a tunnel of love, concession stands and games, and behind the keyboard is the facade of a calliope. Colorful pennants are hung across the ceiling. While a few songs mention things like the calliope or the ticket booth, most of the numbers could occur anywhere. The setting Zemla designed provides a context in which the assemblage of so many personalities and stories is believable. After all, everyone goes to a carnival. And what better place is there to embody that most French sentiment, joie de vivre?

The costumes, designed by Laura Nicholson, were very cute. The men wore a variety of suit ensembles and the women switched between pants, skirts, and dresses, all of it pulling from a color palette of pastels. The styles evoked a sense of being lost somewhere in the mid-twentieth century; appropriate, considering the decades Jacques Brel lived and composed in. The bright colors also elicited the nostalgia which permeated many of the songs, as well, tapping into the universal need to remember the past as brighter and better than it was. On another note, I’m not sure if it was intentional or not, but the black hats and suspenders the men wore during “Timid Frieda” reminded me immediately of A Clockwork Orange, which I found absolutely hilarious given the song and staging.

Fuzz Roark’s great lighting design effectively separates one scene from the next and accentuates the unique mood of each song.  Michael Feathers, percussionist and pit conductor, led the surprisingly large band. Featuring percussion, keyboard, guitar, mandolin, and bass, this was quite a large group for such a small space, but they added a sense of intimacy to the entire show. It may be my prejudice for stringed instruments showing, but I especially loved Christie MacDonald’s mandolin playing, which was beautiful and added a definite Parisian touch. Greg Bell and Jarrett Rettman play bass, though on different nights, as do Peter Morey and Vincent Henningfield for the keyboard. The rest of the creative team is filled out by Stage Manager and Assistant Director William Meister, Stage Manager and Assistant Choreographer Ahsal Toolabi, and Booth Techs Stephy Miller and Ben Kinder. 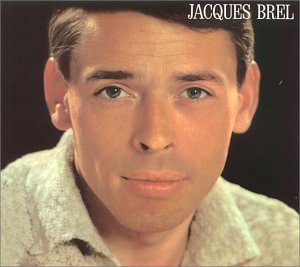 Copney has taken Brel’s amazing music and created a gem of a show. Jacques Brel’s songs are themselves amazing pieces of art, encapsulating  all the highs, lows, and hilarities of life. They illustrate the complexities of human emotion, finding humor in tragedy and vice versa. With all that’s going on in Baltimore, some reflection on human nature through the power of song may not be misplaced.

In the words of Jacques Brel: