In Part 3 of a series of interviews with the cast of Once on This Island, meet Carl Williams.

Joel: Please introduce yourself and tell our readers where they may have seen you perform before on our local stages. Where did you get your training?

Carl: My name is Carl Williams and I was just seen in KAT’s production of The 25th Annual Putnam County Spelling Bee as Mitch Mahoney. As far of training, most of my training has been in my schooling as well as two summers in Signature Theatre‘s Overtures Program.

I wanted to be a part of this production mainly because of the music. It’s just so much fun and makes you want to get up and dance.

Have you ever appeared in a production of Once on This Island before and who did you play? What makes this production so special?

I’ve never been in Once On This Island before. What makes this production so special, besides the sheer talent of my castmates, is the fact each actor I believe has truly made their particular characters their own.

How would you describe the score that Stephen Flaherty and Lynn Ahrens have written?

Fun. Simple as that.

Have you appeared in any other musical written by Stephen and Lynn? If yes, which musical and who did you play?

No, I’ve never been in any of their other shows; however, I’d love to be in a production of Ragtime; it’s one of my favorite shows.

Who do you play in Once on This Island and how do you relate to your character? Do you share any similar traits? Which character is so much like you and why and how?

I play Papa Ge, the sly God of death. Papa Ge and I definitely share similar traits. We’re both prideful and headstrong and sometimes that can get us in trouble. 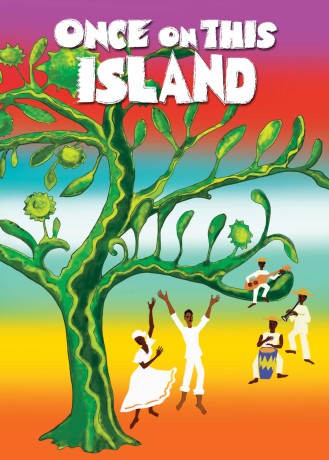 Tell me about your big solo numbers. What do we learn about your character as you are singing the songs?

Well, my first big solo number is called “Forever Yours.” It starts out as this beautiful ballad between Ti Moune and Daniel singing their love for each other but Papa Ge interrupts halfway in, completely taking over the song and attempts to steal Daniel’s soul. It’s from this song that we learn how evil Papa Ge really is. He’s not a nice guy, sure he may have a flair for the dramatic but he’s definitely the bad guy.

What are some of the themes of the show that today’s audiences can relate to?

Love and Family are two of the biggest themes of the show and fortunately two of the most easily relatable for audiences in my opinion.

Why should families bring their kids and grand kids to see Once on This Island?

Families should come see Once On This Island because it’s lighthearted and fun enough for kids to enjoy themselves but engaging and complex enough for older audiences to not get bored,

What do you want audiences to take with them after seeing Once on This Island at Creative Cauldron?

I just want audiences to have fun and enjoy themselves. I want them to leave the theatre singing and dancing along to the music from the show that’ll hopefully be as stuck in their heads as it is ours.

Once on This Island plays from May 8-31, 2015 at Creative Cauldron – 410 South Maple Ave, Falls Church, VA in the Pearson Building Square Building at the intersection of Maple Avenue and Lee Highway (Washington Boulevard). Performances are Friday & Saturday at 8 PM and Sunday at 2 PM & 7 PM. For tickets, purchase them online.

LINKS
Meet the Cast of ‘Once on This Island’ at Creative Cauldron: Part 1: Malcolm Lee.

Meet the Cast of ‘Once on This Island’ at Creative Cauldron: Part 2: Ian Anthony Coleman.