One of the coolest events I went to last year was David London’s Creative Spirit Séance.  At its core, Séance is a eerily wonderful magic show but it’s also a creative playground where one has the chance to explore one’s beliefs in things that might … defy scientific explanation. David is remounting the show, with a few new twists, starting Friday, May 15th at Church & Company, a gorgeous Victorian parlor complete with flying loveseat in an old converted church.

Lucrezia: What was the impetus behind the Creative Spirit Séance?

David: I have been dreaming of creating an original séance for over 15 years. One of the major turning points in my exploration of magic was the discovery of something called ‘Bizarre Magick’, which incorporated magic tricks with stories, rituals, and strange objects. One faction of Bizarre Magic is theatrical séances. One of my notebooks from High School is labeled ‘Spirit Magic,’ and includes some early thoughts on manifesting spirits. For 15 years it swirled around, and I battled philosophical issues with summoning the dead. Then, a few years ago, it came to me that I would create a séance whose premise was not to summon the dead, but rather to call forth the Creative Spirit.

How has the show changed from last year’s run?

Ultimately, I felt like the first run of the show lost its focus on the Creative Spirit in the second half, and focused much more on communicating with the dead. Though the exploration of various forms of Spirit Communications remain in this run, and is integral to the experience, I have spent a lot of time re-working the script to align our time around the séance table more with the original intention of finding the Creative Spirit.

What do you hope folks will take away from this?

The ultimate dream of the séance would be to awaken something within people. To remind them of the presence of the Creative Spirit in many, if not all aspects of our reality. Some people will have profound experiences. Others will simply have fun, engage in acts of creation, be startled, and think a bit and maybe that can be just as profound.

How much research had you done going into this show?

I have been interested in séances since I was a teenager, so, in a way, my research began then. A lot of the ideas incorporated into the show have been areas of interest and research over the last ten years. Once I committed to producing the first run, I then engaged in about 18 months of serious research into creativity, play, spiritualism and divination. All that combined produced the Creative Spirit Séance.

Do people ask you how it’s done?

Just like magic tricks, some people ask, others don’t want to know, and some choose not to think about it. Unlike magic tricks though, when it comes to séances, still other people BELIEVE.

I think people go to a séance because they’re looking for something as opposed to going to a magic show where they’re mostly going to be entertained.

I agree. Séance is a totally different and unique form that comes with its own set of rules, implications, and pre-conceived notions. This is why I have remounted the show. To take what I learned from the last time around and apply it, and see what I learn this time.

What are the elements of the show?  I remember there was automatic writing and of course intuitively determining which triangles were drawn on (a personally very eerie and cool experience for me)?

The first half of the séance explores practical ways we interact with the Creative Spirit. We start with an alchemical ritual which explores the transformation of matter. We discuss synthesis and play several games inspired by surrealism and divination. The demonstration you refer to, which you yourself experienced is a demonstration designed to see if it is possible to sense the physical presence of the Creative Spirit into objects which had been infused through our acts of creation. We proceed through a cleansing ritual, to purify our minds before sitting down at the séance table.

The second half of the séance pulls from and shares the history and tools of spiritualism, before attempting to make contact directly with the spirit world. This includes automatic writing, with the hopes that the spirits can lead us to the spirit that we seek.

How integral is the location and set?

The séance was designed to eventually break down and travel. It is my plan to one day be in different types of venues and locations. And I think it could work anywhere. That said, Church and Company is really perfect. I cannot imagine the show having a better home in Baltimore.

Jeramie Bellmay was responsible for designing and fabricating most of the props and set for the show, and provides overall Art Direction on all of the physical elements of the Séance.  The objects are as much a part of the show as the script, so his contribution is immense. The table was designed and fabricated by Goatman Hollow Productions and finished by Jeramie. The Séance has a complete score from beginning to end, which was created by Daniel Merrill of Aligning Minds and A Path Untold.

Do you recommend folks who are coming to your show do anything to prepare?

As far as preparations, I strongly suggest wearing creative attire to the séance. Secretly, this is just as much about having a fun group, as it is to get people engaging in their own creativity before the show has even begun.

I also recommend eating half an avocado before the show. And one marshmallow.

The thing about séances is that they inherently open people up, like a ritual. What I was most unprepared for was what people experience on their own when they are “open.” Things I have no knowledge of, or control over.

Is there any one instance in particular that stands out?

There was a moment where I saw real fear come over someone, and from that point in, they were having a very real experience of something. What exactly, I do not know. Ultimately, they told me it was a positive experience, but I continue to struggle with my role in facilitating such things .. things beyond my control …

If you are looking for something less abstract, there was one night where in one séance, there was a single lightning strike at a key moment, three books fell at the same time, and some chance happenings that made us all look at each other – strange, strange subtle magic. 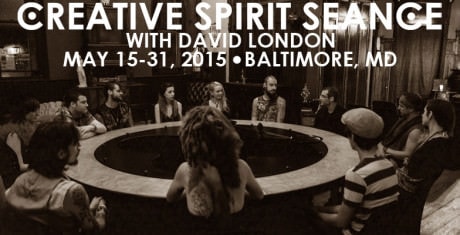 David London’s Creative Séance plays May 15-31, 2015 at Church and Company – 3649 Falls Road, in Baltimore, MD.  Each show is limited to 12 participants. Tickets are available online.