Storytelling is at the core of theatre, but it also stands alone as a unique form of entertainment. Not quite monologue, not quite stand-up comedy, what storytellers do best is blend their personal experience with gripping narrative in a way that draws audiences shockingly close. Speakeasy DC—the gold standard in storytelling this side of the Potomac—will host an intimate LGBT-themed evening of such stories at the 9:30 Club on June 5th. Coinciding with DC’s Pride Week, the one-night-only event is called Out/Spoken. If past Speakeasy DC shows are any indication, huge laughs and heartfelt surprises are in store. We asked each of the eight featured storytellers to share what inspired their tales, and how their stories will connect to a Pride Week audience.

Amanda Sapir on her closeted grandmother:

My story is a generational one and an homage to my late grandmother, Helen Theodora Becker. What I can now share on a stage in front of hundreds of people in 2015, she suffered for knowing about herself in the 1940s and throughout her life. I am telling our story for her and for us.

Poet Muriel Rukeyser wrote, “What would happen if one woman told the truth about her life? The world would split open.”  Always I am hoping my truths split open more real and loving worlds in myself and members of the audience.

Gina Chirillo on her partner’s secret:

I wanted to tell my story because I wanted to share my unique experience… and make people laugh!

I hope Pride audiences will be able to connect with my story, because I think we’ve all found out secrets about our partner when things are starting to get serious… but that’s all I’ll say for now — you’ll have to come to the show to hear more!

Morgan Givens on facing his fear with humor:

I wanted to tell this story because so often stories that come from within the community are spun into a negative light. Almost as if there is no laughter or joy, and we can’t find the light in the shadow of darkness. I’m telling this story as a reminder that things are not as dire, and we are capable of a wide range of emotions that spring from our individual experiences.

I hope the audience can connect with the oneness of the story. That they relate to the relief that comes from realizing a fear was unfounded, and the humor that at times comes from facing a fear, and finding strength and courage in the most unlikely of places.

Alex Brewer on his coming out breakthrough:

I believe that storytelling is an external exercise in assigning meaning and creating a narrative around our own personal experiences. For the LGBT community, “coming out” is one experience or story that I feel can sometimes define our relationship with the identity. Although the coming out process is rarely confined to one instance, the story I am sharing was not only a seminal moment within my own personal coming out narrative; it also was a breakthrough point for my overall understanding and acceptance of what being “gay” means for me.

The “coming out story” is a universal narrative that every LGBTQ person has grappled with in some point in their lives. It’s something that every queer person has to deal with, but is completely shaped by context. My hope with my story is that it resonates with Pride audiences in that it’s a familiar situation that we’ve all experienced, but also prompts them to think of their story in a potentially new light. Ideally, I would love the audience to walk away with a feeling of “oh I totally know what he means,” but at the same time  “Hmmm, I’ve never thought of it that way before.”

I think the storytelling process is very weird and wonderful. People compare it to therapy because you’re forced to analyze and re-analyze events from your past. In my case, I had to reexamine those early days when I had just begun to define right and wrong for myself. As Socrates said, “the unexamined life is not worth living,” and storytelling is a great way to examine your life.

If the person in the audience is LGBTQI, I hope the story sparks some empathy. It can be easy to give the closeted Christian a hard time because Christianity is the dominant religion and has played such a big role in our oppression. At the end of the day, however, closeted Christians are still members of our community.

If the person in the audience is not LGBTQI, I hope the story triggers recognition that nearly everyone has some sort of a closet against which they struggle. So much of life is about wrestling with the contradiction between what we’re told to feel and what we actually feel. Unfortunately, this isn’t unique to just the LGBTQI community.

Cristina Calvillo-Rivera on being butch:

I fell in love with community storytelling as a means of activism seven years ago, after I told my first coming out story. I quickly realized that people find compassion, understanding, and support within themselves through stories. I have been sharing stories in some way ever since. I believe stories can connect us across a variety of diverse spectrums and empower people to celebrate and uplift their own voices and lives. When I moved to DC, I was looking for community, safe spaces, and ways to share my story again. I was humbled to be invited to share and celebrate my own journey with such a special group.

I find it refreshing when I read stories of women who share similar butch or masculine of center experiences as I do—from the struggles to the small wins we have after finding a blazer that fits just right. It gives me a sense of community, and I hope that Pride audiences will find ways in which they can relate to my story. I want people to too feel that they are not alone.

Alan Mishler on struggling with identity:

I grew up in a relatively tolerant environment, my parents had gay friends, and I wasn’t bullied; and yet I struggled a lot with my sexuality and suffered a lot because of it. I’m guessing that’s a common experience, but I haven’t heard many stories about that, so I thought it would be interesting to present my own.

Robin Katcher on her mom’s love of a good laugh:

Stories connect people to one another. They illuminate aspects of our humanity, helping us to make sense of ourselves, others and the world around us. And the best stories do that with a healthy dose of entertainment, heart, and humor. No one loved a good story and a good laugh more than my mom. I wanted to honor her by sharing our story. I just blocked out the part where I’d have to get up in front of 100s of people. So I really hope audiences laugh liberally and connect authentically.

Most of us have feared how a loved one will react to our coming out.  Though may be not everyone’s story involves airports, trumpets, and Ellen.  I hope audiences get a laugh, feel the love between two imperfect people, and find something for themselves. 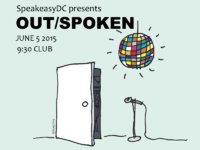 Out/Spoken will play for one night only on Friday, June 5 at Speakeasy DC, performing at the 9:30 Club – 815 V Street NW, in Washington, DC. Purchase your tickets and parking vouchers online.

Among the hats John Stoltenberg wears are novelist and author, creative director and communications strategist, and avid theatergoer. Decades ago, in college, he began writing, producing, directing, and acting in plays. He continued through grad school—earning an M.F.A. in theater arts from Columbia University School of the Arts—then lucked into a job as writer-in-residence and administrative director with the influential experimental theater company The Open Theatre, whose legendary artistic director was Joseph Chaikin. Meanwhile Stoltenberg’s own plays were produced off-off-Broadway, and he won a New York State Arts Council grant to write plays. Then his life changed course: He turned to writing nonfiction and what became a distinguished career as a magazine editor. But he kept going to the theater, the art form that for him has always been the most transcendent and transporting and best illuminates the acts and ethics that connect us. He tweets at @JohnStoltenberg.

Since graduating American University in 2013, Michael Poandl has pursued opportunities that combine his twin passions of politics and the arts. In the pursuit of advocating for the arts on the level of public policy, he ​currently serves as the Fundraising Associate for the Americans for the Arts Action Fund, the only organization dedicated exclusively to electing pro-arts candidates on the national level. Having studied Theatre and Art History in college, he remains an active theatre artist, and is proud to frequently contribute to DCMetroTheaterArts.com as a critic and interviewer.