You might think a suicide pact among losers who meet on line would not be a terribly good premise for a warmhearted comedy—much less a noir one à la Martin McDonaugh. You might assume there’s not a lotta laughs to be had from a pull-the-plug club. Assuming Chatroulette attracts the suicidal (which apparently it does), you might not care to watch a team of chatterers go terminal in real time on stage. But you would be wrong. Dead wrong. And the evidence of your mistakenness would be Bob Bartlett’s happiness (and other reasons to die). This new entry from The Welders, directed with fascinating dispatch by Gregg Henry, is a lively and offbeat end-of-life sitcom that is anything but grave.

First of all, there’s the awesome set, which you see first thing as you come in. With it, Scenic Designer Collin Ranney has virtually added a character to Bartlett’s play. It’s a wood-frame room without walls housing a distressed and dilapidated kitchen evidently inhabited by a hoarder—and it’s situated between facing rows of seats so that the audience can see through it to the opposite side.

That set’ll be the last thing the audience sees through for the next hour and a half. Once this riveting and rollicking comedic riff on life and death takes off, you don’t see anything coming.

And it takes off with a bang. Literally. A startling, shocking bang. Which other reviews might give away. But not this one.

Three would-be suicides have gathered here, a cabin on the outskirts of frigid Duluth. They have been cyber-summoned by an octogenarian, a woman whose kitchen this once was. The three are anonymous to one another except as their handles. We (and they) learn their real names are Jeb (Elan Zafir), Misa (Melissa Flaim), and Emilio (Carlos Saldaña).

The pretext for their gathering is a pact they’ve made with one another not to go to their deaths alone. They’re expecting a support group for those who have given up and are ready to give up the ghost. Except they may now be dealing with an actual ghost (an oxymoron, I know; but once you watch this funny-bone tickler, you’ll see what I mean).

In this dark winter’s tale there be chilling sound and light effects, devised by Lighting Designer John D. Alexander and Sound Designer Kenny Neal. There also be two surprise visitors. One is a sort of soothsayer, Misoka (Miyuki Williams). Another is another wannabe-dead pledge, Nolan (Graham Pilato, whose standout performance in this stellar cast was particularly poignant and moving).

Will they or won’t they off themselves? is rather an unsustainable through-line of suspense, since, this being hilarious from the get-go, you kinda guess that’s not gonna happen. But what swiftly turns out to be remarkable and richly rewarding about this play is that the suspense shifts to who these characters are, and who they become to one another, and what bonds them, and what become their reasons to live on.

The script has a few uncertain moments when its clever contrivances seem as exposed as the two-by-four studs and joists framing the playing space, and it sometimes seems oddly noncommittal about whether it wants to be a ghost story. But ultimately the play stands up as a sturdy construction, with payoffs of laughs that are their own lease on life. 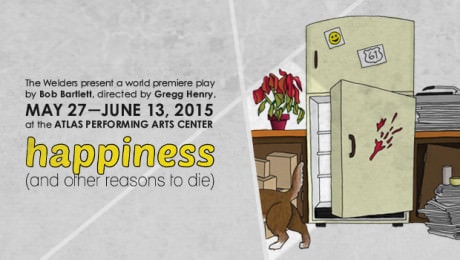 happiness (and other reasons to die) plays through June 13, 2015 produced by The Welders performing at Atlas Performing Arts Center – 1333 H Street, NE, in Washington, DC. For tickets, purchase them online.