Dirty Blonde, written by Claudia Shear and directed by Jennifer Lyman, follows two stories: the rise to fame of star Mae West and the blossoming love affair of her two most obsessive fans after her death. The play is full of laughs, many coming from the fun, not-so-discreet sexual innuendos of Mae West during her improbably and exciting rise to fame.

Janette Moman played Mae West, the seductive scarlet around whom the plot turns. At times her voice seemed quiet, particularly during the musical number Oh My! How We Posé when her voice was nearly completely drowned out by those of Chris Gillespie and Daniel Douek, her two male accompanists. Despite this, her performance was laudable. She very ably and often switched from the sexy and rambunctious Mae West from the early parts of her career to the desperate, still lascivious Mae West towards the end of her life. Her phenomenal New York accent and her somewhat raspy voice were perfect for capturing the essence of a character defined by her bluntness and provocativeness. Moman delivered her lines, chock full of clever innuendo, with the pride and seduction indicative of her character.

Alexandria Guyker played Jo, the obsessive fan of Mae West. Guyker’s voice was stunning and she showed great range and control during her solo number I Never Broke Nobody’s Heart When I Said Goodbye. Her performance was solid throughout the play. She and Daniel Calderon showed wonderful chemistry, especially when they were drunk or high. The heroine of the play, Guyker displayed the perfect balance of confidence and insecurity, wit and seriousness, and joy and fear necessary of a young woman dealing with a potentially gay suitor.

Daniel Calderon played the male lead, Charlie, and was excellent. Though his New York accent seemed inconsistent and his singing voice constrained towards the beginning of the play, Calderon rallied for a magnificent performance. His was a very insecure character and Calderon successfully displayed that insecurity as an immature 17 year-old and as a more mature adult. Calderon also successfully highlighted the contrast between the incredibly unconfident Charlie throughout most of the play, and the suddenly bold and self-assured Charlie at the end of the play. I would have liked him to exhibit more excitement when he first met West, as any fan would exhibit when meeting their favorite star.

Chris Gillespie played eight supporting rolls throughout the play. Ranging from a strict and firm judge to a free-spirited, sassy drag-queen, Gillespie was sterling throughout. His was the difficult job of bringing eight important and unique characters to life and he performed admirably. Gillespie regularly stole the scene and was the most commanding force on stage. His voice was excellent. In the number I Love It, Gillespie (West’s first husband) was dominant. In the number Oh My! How We Posé, Gillespie (drag-queen Eddie Hearn) sang and danced with a sexiness rivaling Moman’s. The speed of his costume changes was unthinkable and he, therefore, had to completely change his countenance, mood, and voice with very little time. Gillespie took all the challenges of playing so many different rolls and made them seem irrelevant.

Daniel Douek had a similar job, starring as seven different supporting rolls throughout the play. He, too, was remarkable. As a court clerk and as a mindless muscleman, a theater director and a rich producer, Douek’s over-the-top performances were convincing. His concupiscent reactions to Moman’s advances was often the most effective way in which West’s desirable nature was illustrated. Douek’s voice nearly matched his amazing counterpart, Gillespie’s, and the two of them interacted beautifully, usually as jealous enemies of each other.

Set Designer Andrea D’Amato had the challenge of designing a stage with nearly a dozen different settings. These included a graveyard, a Hollywood film set, three different New York apartments, the new York city streets, and many others. D’Amato’s solution to this problem was ingenious and simple. There was a screen at the back of the stage which labelled each setting and had a corresponding picture. For example, at the graveyard, the heading read “Cypresse Hill Cemetery” and there was a picture of a cemetery. This was an easy way of ensuring the location of the action was always abundantly clear. Besides the screen, the stage had sparse furniture: A lounging chair in West’s apartment, a couch in Charlie’s, a piano on a vaudeville stage. I do wish that the changing of sets could have been a little more discreetly and quietly.

Costume Designer Beverley Benda did a superb job. From West’s elegant but outdated gowns which she wore in her old age to the dorky plaid shirts from Charlie’s teenage years, and everything in between, was absolutely perfect. Most of the costumes were simply every-day outfits from either the modern day (for Charlie and Jo) or past decades (for the flashback scenes with West). However, West herself was always dressed in the fanciest of dresses and she always looked exactly like one would expect the glamorous star to look. Benda had the added challenge of making costumes which were easy to change for Gillespie and Duoek who each played a multitude of characters. She rose to that challenge easily. This was best exemplified when Gillespie literally changed costumes, and therefore characters, without leaving the stage, by simply changing his suit jacket and adding a hat. Benda must have been incredibly proud as the play ends with three characters, one being Calderon, wearing the exact same dress.

The accompanying music was played by David Dender, a pianist, and David Burrelli, a bassist. Dender stayed off stage the entire time and Burrelli was off stage except for a short appearance during one of West’s solo performances. Both musicians played outstandingly.

Hair and Wig Designer Rebecca Harris deserves a special notice because of the extravagance and, frankly, insanity of old Mae West’s hair. It was big. It was bold. It was life-changing. Harris’s other work throughout the play was also impressive.

The Little Theatre of Alexandria’s Dirty Blonde is an upbeat, riotous play which is absolutely fun to watch. Don’t miss it! 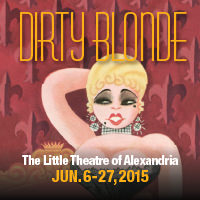