Madness has been dramatized in theater at least since the ancient Greeks. The mind come loose from its moorings, the persona altered, a terror deep in the self—whether in life or on stage, this troubled and troubling extremity of existence holds the human imagination captive. And notwithstanding modern psychiatric and pharmacological interventions, there is a persistent mystery about madness that keeps dramatists returning to it and audiences intrigued by it.

Cristina Bejan’s play Finally Quiet in My Head—which had its U.S. premiere in the DC Black Theatre Festival over the weekend—follows the story of a young woman named Morgan, whom we first meet in Saint Elizabeths Hospital, the District’s public mental health facility for intensive inpatient care. Morgan, played with winning high-spiritedness by Muslima Musawwir, begins by reciting, as if at a private poetry slam, a hallucinatory transhistorical dream she has had that includes imagery of plantation life and before.

Thereafter the play unfolds naturalistically, with scenes set in the psych ward, Morgan’s parents’ home in DC, and her friend Tosha’s New York City apartment. In jump-cut flashback chronology, we see Morgan institutionalized, then out and about, then in again, then out. And for the most part these scenes establish a baseline of conventionality for the narrative. The shrink Dr. Raj (played with cloying cheer by Janani Ramachandran) is almost a cliché of smarmy sympathy. Deborah, Morgan’s mother (played with shrill exasperation by Gwen Lewis), is almost a clichéof  parental scorn. Anthony, Morgan’s father (played with volatile impatience by Steven Langley), is almost a cliché of the even-tempered supportive parent who can blow a fuse in a minute. Tosha, Morgan’s friend from childhood (played with flippant liveliness by Tuesday Barnes), is almost a clichéof the giddy girlfriend who can dish about sex and boyfriends but doesn’t get Morgan at all.

The character in Morgan’s world who breaks the mold, who is conspicuously atypical as dramatis personae go, is a fellow patient she meets in the psych ward named Gerard (played with teddy-bear-like warmth by Christopher Akinbuwa). Gerard is from Senegal, and Morgan has no idea why he has been institutionalized. He doesn’t know why she has been either. In other words, they do not see each other as the world sees them, as “mentally ill.” And on that lovely simpatico and level ground, the two become trusting friends.

At the very end Gerard has a speech that is like a bookend to the one of Morgan’s that began the play—a riff that poetically echoes hers. By this time we have learned what trauma precipitated Morgan’s “nervous breakdown” (eloquently foreshadowed in a dream Morgan relates about Mary the mother of Jesus). And by this time the playwright has arranged for reconciliations that wrap up the story. But with that last speech of Gerard’s, the play leaves us with a provocative loose end: Did Morgan imagine this gentle man to heal herself?

A presentation of the new culture and art collective Bucharest Inside the Beltway, Finally Quiet in My Head was co-directed with evident personal conviction by Bejan and Brittney Sankofa. The play was first produced in 2006 in Oxford, England, where Bejan was a Rhodes Scholar. Though in performance the more conventional scenes lacked the dramatic tension that the play’s overarching theme and weighty substance might suggest, the original story Finally Quiet in My Head tells, its poetic framing, and its two central characters—Morgan and Gerard—stay compellingly in the mind as an intriguing modern take on the age-old enigma of madness. 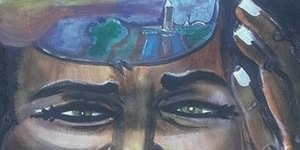 Running Time: About 75 minutes, with no intermission.

Finally Quiet in My Head played June 20 and 21, 2015 as part of the DC Black Theatre Festival performing at the Anacostia Arts Center – 1231 Good Hope Road, SE, in Washington, D.C.

LINK
‘Finally Quiet in My Head’ at DC Black Theatre Festival 2015 at Anacostia Arts Center on June 20-21st by Cristina A. Bejan.