A theater troupe from Toronto brought this play to town for three performances only for the DC Black Theater Festival. Secrets of a Black Boy speaks with great honesty and artistry. It achieves on stage that rare synthesis when a show that is entertaining enriches an audience’s understanding at the same time. One wishes it could stay in town longer so that more people could be touched by it. 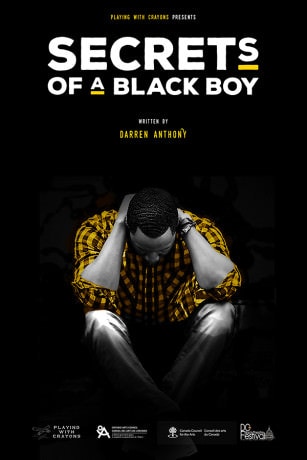 Written by Darren Anthony, Secrets of a Black Boy reveals the inner lives of five young black men who have gathered for one last game of dominoes at an inner-city community center that is about to be demolished, along with nearby public housing, in an urban gentrification land grab. Though this particular back story is based in Toronto, it resonates implicitly for neighborhoods in DC where it also has been imposed.

Upstage were cardboard boxes piled high into walls painted colorfully with graffiti. Eminently portable (because the boxes could readily be disassembled), this eloquently simple set design evoked perfectly the precarious transcience that brought these five men together. Stage right was DJ O, spinning an evocative mix of “Billy Jean,” “Let My People Go,” Dr. King’s “I Have a Dream” speech, and such. Across the stage was stretched a yellow construction-site CAUTION tape that was promptly torn down by an in soundless protest. A wordless prolog began—a tableau of a man in African garb being shackled then enslaved then freed. The vivid and evocative stage picture lingered like a haunting collective memory throughout all that followed.

And what followed was engrossing: an amalgam of monologues, scenes, and choreographic interludes that not only brought us into the lives of five distinctly drawn characters but also presented us—through the tight and cohesive performance of the group as a whole—with extraordinary stage images of authenticity among men. The five actors (Troy Crossfield, Shomari Downer, Al St. Louis, Samson Brown, and Leighton Williams) each displayed individual strengths—each was clearly committed to the character he played—but it was when Director Kimahli Powell had the ensemble moving, singing, exulting, incanting together that Secrets of a Black Boy was off the hook with unity and energy.

Here’s just a sampling of insightful moments in the show:

• There’s a fatherless kid named Biscuit, whom the older men try to mentor and raise up right. Biscuit has a funny-sad monolog about how he looked up to his only role model, his big brother, whose sexual prowess with a procession of females he witnessed: “He lasted…eight minutes!” the boy says impressed, to what seemed rueful chuckles of recognition.

• One of the men tells of the day his brother, who was dealing drugs, was shot: “I wake up wondering if this is my day to die.”

• The ensemble mock-instructs the audience in “the wifey checklist”—a semi-serious/semi-facetious list of tips for women who want to keep a man. (“Be a lady on the streets and a freak in the sheets.”) It sends itself up even as it makes points that land.

• Each of the monologues was terrifically well written but one that seemed particularly edgy yet real was a speech by a character who said he was “a successful black man with a preference for white women. Deal with it.”

• The lively choreographic interludes—which kept the pace moving briskly—included one set to Al Green’s “Let’s Stay Together,” demonstrating this was a cast that had bonded solidly and with esprit.

• During a five-minute pause the cardboard boxes were turned to reveal sepia renderings of faces including that of Dr. King. Thereafter the ensemble performed a moving tribute to Trayvon Martin, Michael Brown, and others: “It coulda been me, another black man down.” “I can’t breathe.” “I was trying to be the best man I could be.”

• Among the powerful monologues in the second part was one by a man who told of losing his temper and abruptly beating the woman he loved. He recalls watching his pops hit his mother, then hit him. And in a stunningly staged episode we see him wreak his own violence on…a metal folding chair. The image of that chair taking his abuse was chilling. But the follow-through, when we see him realize remorsefully what he has done, was equally impactful. In a scene that lasted but ten minutes, the writer, director, and actor achieved something devastatingly iconic and unequivocally condemnatory about domestic violence.

This show had humor. This show had heart. This show was fun to watch. But even more important, Secrets of a Black Boy is a testament to truths that may be told by men among men if they are unafraid to be honest with one another.

Running Time: One hour 45 minutes, including one short pause.

Secrets of a Black Boy played June 26–28, 2015 at part of the DC Black Theatre Festival at The Andrew Foster Theatre of Gallaudet University – 800 Florida Avenue, NE, in Washington, DC.