Whether you are looking for an interesting evening of theatre or a high end New York City apartment, Alex Mahgoub will not disappoint. As Mahgoub takes the stage in his solo show Baba, he hands out a stack of business cards to the audience. Hey, if you have an audience why not take advantage? 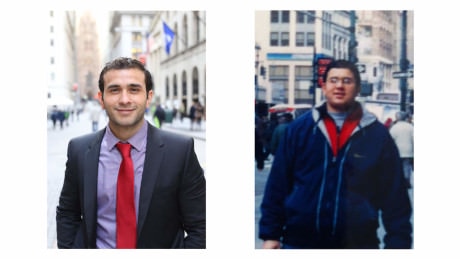 In the present Mahgoub is a Real Estate Broker in New York City but this show is about his journey, not his destination, and he quickly leads the audience back to his childhood. We learn that Baba means “father” in Arabic and that Mahgoub was only ten when his Baba, an Arab Egyptian immigrant, was brutally murdered. This is only the jumping off point for the show that unfolds. In Baba Mahgoub addresses his struggle with death, obesity, bullying, identity, and bisexuality and explores the omnipresence of his father in his life.

Mahgoub uses both narrative and caricatures of the vibrant people he has encountered to engage the audience. He is especially successful at bringing to life his father – who is the definition of a strong, well liked man in young Mahgoub’s eyes. The stark contrast between the son’s soft demeanor and the tough, confident personification of the father vividly demonstrates the struggle young Mahgoub felt having a father that he wanted to be like so much but that he was so elementally different from.

The narrative of Baba often covers deeply emotional components of Mahgoub’s life. When he becomes lost in his recollections the simplicity of his delivery is powerful. The reenactment of the young Alex looking at the (invisible to the audience) belongings of his recently murdered father was enough to draw a deep sense of nostalgia and loss. During some of the particularly difficult moments in the show I wished Mahgoub would revert to this simple approach and trust the power of his words without trying to manufacture an emotional connection.

The small upstairs bar area of the Argonaut provides a setting that lends itself well to the intimate sharing of one’s life. Mahgoub is only given the aid of a single chair, a glass of water, a single stage light, and the occasional sound cue to help him through his one hour performance. In this case less is more – I enjoyed the lack of distractions. The few up and down light cues and  the transitional sound cues (that sometimes overpowered the dialogue) could be tweaked slightly to be more effective, but Mahgoub carries this show on his own.

Mahgoub credits friend and director Arman Merlo’s successful solo show as his inspiration, but Baba is truly his creation. Life has provided him with a vast number of stories worth telling and he tells them with an accessible simplicity. Already a strong show, Baba can only get better as Mahgoub becomes more confident in the venue and the material. After an hour you will feel like you have made a new friend.