“I am not a human being. I don’t pretend to be a human being. I am a comic” are among some of the opening lines in Will Durst’s one-man comedy show BoomeRaging: From LSD to OMG. Written and directed by the 63-year old comic himself, it chronicles the struggles of the now-aging Baby Boomers (people born between the years 1946 and 1964) or as Durst puts it, when “acid flashbacks meet dementia.” The way Durst spins, it doesn’t seem like as much of a battle as one would believe. 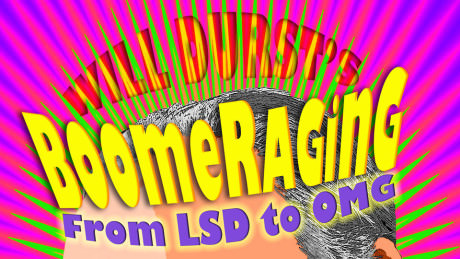 I will admit that I was a little skeptical going into this production. As a proud millennial, I felt somewhat isolated in the back row of the 56-seat classroom-turned-theater. Not only was I the youngest person there, but the next youngest person had about a decade and a half on me. I can’t identify to the Vietnam years and the Beatles the way that the rest of the audience could, although I could probably operate my cell better than they could. However, from the moment Durst entered the room, I knew I was in for a wild ride.

A composite of Kevin Costner and Christopher Walken, Will Durst gracefully stumbles around the stage with his Starbucks in hand, sporting white shoes and rainbow suspenders. Durst’s casual manner and spot-on comedic timing had everyone in the crowd raucously laughing throughout (myself included). With his “retro” overhead projector and a mic stand, he was able to create a comedy club feel in the middle of this unconventional space.

Despite being targeted for baby boomers, Durst manages to make the show applicable to everyone. One particular running gag about all of the presidents needing to golf in order to qualify for office had me in stitches. The enduring question posed by Durst of “Where’s my jetpack?” made me think about my own father, who frequently makes the same reference. There were some jokes that did admittedly go over my head, but it was a small price to pay.

The comedy also gives way to sentimentality at times. Stories of his family and of his outlook on life as the autumn years begin were incredibly heartfelt and never sappy. It served as a nice balance from the barrage of hysteria that defined most of the production.

Whether you are 16 or 62, BoomeRaging will leave you with a smile on your face and hope in your heart. It reminds us that every generation may be different, but the journey through life is invariably the same. And so as Will Durst says, “Flutter on.”

LINK:
Read the Preview on DCMTA