Politics may be all about power, but who is really in control? In Graceless, written by Tom Slot and performed by Original Bindings Productions, it is pretty clear that Aaron Berniger, the Mayor of Anderson, South Carolina, does not have the power. The women in his life bat him around like cats with a ping pong ball. 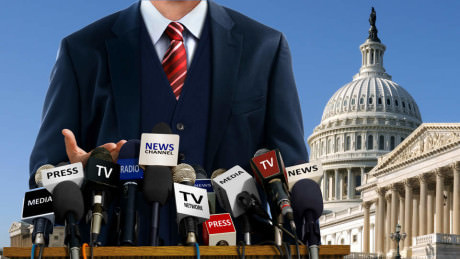 As the lights go down and the actors take their places the audience is greeted with a cacophony of sound – news reports on an old sexual harassment scandal that has just been brought to public attention. Aaron, the professor turned Mayor, has been hit with brutal accusations by an old colleague, the charges bad enough to effectively take Aaron out of the running for mayoral reelection. Did he actually commit the acts he is accused of? The audience is left unsure.

As the lights come up panic immediately ensues. Aaron’s sister, who happens to also be his campaign manager, urges Aaron to give her full control of the situation. Aaron is initially hesitant, eager to remain the nice guy, but is quickly persuaded to give in. Next we meet the enraged wife, Aria, who is furious partially due to her husband’s alleged misconduct , but mostly because the scandal has jeopardized her chances of progressing in her law career. Nasty things are said and in comes one final woman. Grace (Amanda Rodhe), the Governor and an “old friend” of Aaron’s, arrives with a proposal that will clear Aaron’s name and promote him to a position in Senate due to the conveniently timed death of a Senator. Coincidence? Hard to say. If you think it sounds too good to be true then you are on to something.

As the play progresses we watch as Aaron is manipulated in different ways by the three prominent women in his life. For a man that is supposedly in office because he is a kind, god fearing, and moral , he surrounds himself with some truly questionable people. Josh Krebs, with his smooth Southern accent and relaxed demeanor, gives a commendable performance as Aaron. He is grounded as an actor and wears manipulability well.

Nancy, Aaron’s sister and campaign manager, is played by Elizabeth Pegg. Pegg has a strong stage presence and subtle spunk that gives her character an edge of likability that the other two female characters do not achieve. The wife, Aria, a lawyer played relentlessly by Lauren D. Salvo, is a force to be reckoned with. She walks on in a rage in the opening scene and walks off in a rage at the end of the show. The wild card, the young Governer, is almost as relentless as the wife but in a cool and collected way that is even more terrifying. She is played with calculated poise by Amanda Rodhe.

Graceless is presented in the round (the stage of the new Logan Fringe ArtSpace is literally shaped like a circle). On stage a desk and a chair represent the Mayor’s office. The limited number of lights were used to nice effect in a design by Krystal Wilson. The use of a flickering blue light to indicate a television in the office was particularly appealing.

The show was well-staged by Director Sarah M. Chichester – a true challenge in the round. The pacing tended to ebb and flow and some lines were lost due to the Southern accents adopted by all the actors. However, once the basic plot was established the actors fell into a nice rhythm and the audience was able to become fully immersed in the story.

Original Binding Productions, based out of New York City, brings an admirable production to Fringe. Graceless examines not just political power, but the powerful chain reaction that personal relationships can have on a person, a city, a country.

“Why tear a small hole in the front door when you can collapse a whole wall.”