The air is cool, the metro rumbles within earshot, and the buzz of people talking fills the space. A woman offers me a glass of water— a red solo cup filled from a plastic pitcher in her hand. She flutters from one person to the next, hugging and chatting and offering as she goes. The woman is Cara Gabriel, who takes the stage mere seconds after this occurs in her poignant one-woman show she wrote I Am the Gentry. 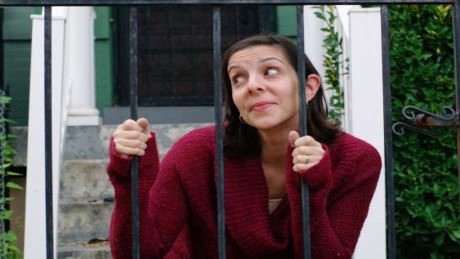 Gabriel’s play, vacillating between heartbreaking and laugh-out-loud funny, explores the ramifications of gentrification on oneself and one’s community. Issues of class, race, education, and inequality are all examined in a series of vignettes, which carry the audience seamlessly along her journey. Despite being told through the lens of her own experience in a gentrifying DC neighborhood, I Am the Gentry is surprisingly relevant, evoking laughs, nods, and even grunts of agreement from the audience. Gabriel’s honesty and vulnerability onstage is impressive and raw, not only calling into question her own role in gentrification but also painting the world and people around her with vibrancy and passion.

Chelsea Thaler’s direction keeps things moving smoothly as we follow from Gabriel’s youthful, optimistic house hunting days to run-ins with prostitutes, pit-bulls, and police— not to mention the many honest impersonations and stories of neighbors all across the spectrum.

The intimate space lends itself perfectly to Gabriel’s show, situated as if we’re all joining her for a private sit-down on her porch on H Street NE. In fact, the simplistic set and props underline the casual atmosphere of the play, as if we were all just leaning back in a chair, sipping water, and chatting with a neighbor, as familiar as can be. Production Designer Tyler Dubuc and Sound Designer Bryce Sulecki work perfectly toward this end, interweaving their design elements to create an atmosphere reflective of Gabriel’s porch and neighborhood— a space relaxing yet slightly on-edge the more we see the consequences of gentrification. Ultimately, the play resonates strongly among the audience, leaving questions and heated discussion that linger long after the show ends.

RATING:  BEST OF THE 2015 CAPITAL FRINGE