Bob Lohrmann brings Wally K. Daly’s monodrama, a two-sided exploration of the world of Catholic confessionals, to the Capital Fringe this year.  The play is a thoughtful, entertaining, and clever journey into the minds of an aging priest and a returning congregant. 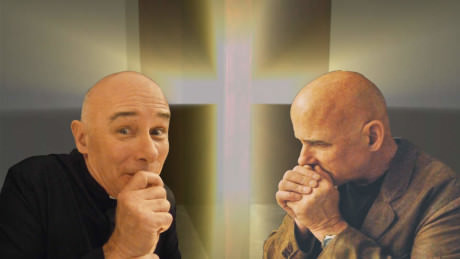 Part 1 (subtitled “Priest: A Comedy of Catholicism”) showcases the inner life of the clergy.  The father rants about his years in the confessional, sharing stories of an elderly woman inappropriately pleasuring her cat, accusing babies of deliberately puking on them during christenings because they know they can get away with it, and preaching the gospel of wet dreams as God’s gift to those who abstain from sexual activity.

Part 2 (“Confessor: A Tragedy of Catholicism”) features a previously lapsed Catholic on his knees, telling of a horrible sin he has committed, he believes, in honor of the faith that he cannot escape.

What makes the play most compelling is the mirroring of themes.  The Priest tells us “we’ve got them for life” while the penitent tells the priest that sooner or later “we all come crawling back” when we “smell our doom.”  The Priest observes various sexual indiscretions that he often finds amusing, while the Penitent tells of one Father Dean, whose probing questions and decreasing penalties drove the boys to accelerate their efforts to experiment with girls.

The script is often amusing (the Priest suggests inspecting the sheets of the congregants to determine if they are taking birth control pills or doing their duty to the Parish), and at times shocking and thought-provoking (the Penitent tells a story of torture-murdering a butterfly and having his faith crushed when the priest says it’s only an insect and “doesn’t count”).

Lohrmann’s performance is professional and intuitive. He is skilled at charming the audience with his fast paced delivery and, with very few exceptions (such as a contrasting quiet “it will make you go deaf”/loud “IT WILL MAKE YOU GO DEAF), the funny bits are well-placed and timed.  Even with a very small opening crowd on a Thursday night, he was able to draw out consistent laughs.  He also captures the confusion, boiling rage, and terror of two people struggling to make sense of their faith as they age.

At the same time, his Priest dialect is stronger than his Penitent, which doesn’t quite read to the ear like that of a working class Brit, and his speech patterns get repetitive and sacrifice clarity for speed at times.

Nonetheless, Lohrmann delivers the vast majority of two half-hour-long monologues with sufficient dynamics to keep audiences tuned in to the rich material of Daly’s text.  Together, Lohrmann and Daly make this performance at Capital Fringe well-worth seeing.

RATING:BEST OF THE 2015 CAPITAL FRINGE