Dog and Pony DC’s Squares, developed and scripted by Shannon Davies Marcus, Rachel Grossman, Danielle Mohlman, and Aaron Mosby, with Tyrone Giordano, is completely interactive theatre at its finest. It requires that you examine your own identity, your privilege, and your place in “the system” that we all live and take part in, all behind the playful and deceptive façade of familiar schoolyard games.

The venue for the performance is an outdoor playground at a Northwest DC school. Upon entering the pavilion at Kendall Demonstration Elementary School, the cast was engaged in different games with audience members. You could try your hand at jacks, marbles, and even double dutch: a game at which my performance was less than respectable. 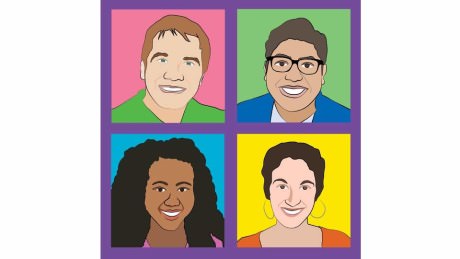 When the performance began, the entire group congregated, and played together. What started out as a piece that was a little too overt (A children’s song: “The system’s great cause it works for me!”) and was less than cohesive, as it was a little hard to discern exactly what was being accomplished in the first ten to fifteen minutes of the performance, began to tie together, slowly, and rather brilliantly. The performers, L. Austin, James Caverly, Rachel Grossman, and Jorge Silva, serve as group leaders through most of the evening.

One of the first activities was to have everyone identify themselves – one man identified himself as “a lawyer.” Another woman said she was a “Suburban Mom.” Perhaps the most interesting self-identification of the evening was a person who described themself as “a transgender early-American historian who studies 18th century sex cults.” These brief identities became crucial, and started the process of self-examination that unfolded over the next 90 minutes.

Without giving away too much, after 85 minutes of engaging in familiar playground competition, the performers and audience stood in a semi-circle on the basketball court. It had become clear that there were some inherent advantages and disadvantages in these games that were played. Even though every participant had been running, jumping, and even throwing balls at each other, everyone was introspective in this long and silent moment. Thoughts arose about the advantages and disadvantages that had been put upon them – and, outside of the playground, how society (or, “the system”) was rigged for them or against them.

What had started as a seemingly innocent evening playing with a parachute on a basketball court, declaring that “everyone’s a winner,” now culminated in a quiet discomfort. Everyone had bonded. Everyone was utterly engaged. No one was playing.

If you’re up for a exciting, active, and one-of-a-kind journey in the next few weeks, go see Dog and Pony DC’s Squares. Uncomfortable reflection on society’s engrained inequity has never been so fun!