Upon entering the Eastman Studio Theatre venue at Gallaudet University, I did not quite know how to respond as I was handed a book entitled Daybreak in Korea by Robert L. Sheldon. As I looked around, I noticed others were handed a variety of items ranging from small notebooks and toys to mugs and comic books. When John Feffer took the stage for his one-man show, he directed us to the back of our program, which showcased a list of instructions on how to pass along the “stuff” in between scenes. In addition, he explained that if your object at the end of the play had an orange dot, you could keep it. If there was no dot, you had to return it to him. 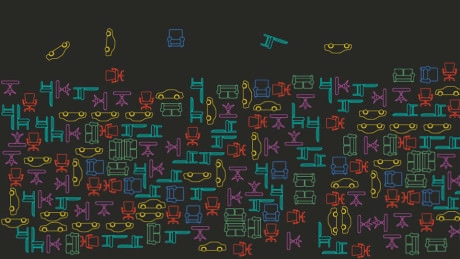 Audience participation in theatre often makes me nervous; however, looking back, this particular case felt different. Feffer created a powerful piece, and I am pleasantly surprised to say that providing the audience with an active role in the journey made the underlying message far more fascinating and thought provoking.

Directed by Natalia Gleason and written and performed by John Feffer, Stuff is comprised of nineteen scenes depicting different anecdotes involving “stuff.” That “stuff” included Feffer’s belongings, such as the books he collected as a child that he refused to give away, despite the lack of space in his housing arrangements later in life. These anecdotes were amusing, particularly when he made fun of his own youthful desire to possess all the knowledge in the world.

However, Feffer also included anecdotes that stemmed from a younger child version of himself, and his mother, Edith Feffer, who passed away on January 3, 2013. He cleverly utilized simple props to showcase his transitions between characters, such as a blue baseball hat to represent his younger self, and a sun hat with a scarf to represent his mother. Through these stories, Feffer expanded the definition of “stuff” to a concept that brought an emotional depth to the piece, conveying how “stuff” can act as talismans from the past.

Each object represents a part of a story from history, and one might keep their “stuff” for their own meaningful reasons. For Feffer, that was his books. He grew up with a hunger for knowledge, and through his stories, he explained that keeping those remnants remind him of that youthful desire. In the case of his mother, Feffer slowly revealed over the course of her stories that her growing up in the Great Depression influenced her need to keep everything, whether that was a theater playbill with a ticket attached to the front, or drawings that her son made as a child.

Feffer began the play with a small joke about how “stuff works.” He explained that stuff gets “passed around,” and the audience was meant to physicalize that idea. At the beginning, stuff simply felt like the random objects he handed to us upon entering. At the end of the play, I looked down in my lap to find Daybreak in Korea by Robert L. Sheldon. After the entire production, the book made its way back to me, and that was when I noticed the orange dot on the top right corner, meaning I could keep it. As I left the play with the book in my bag, I realized his stories involving the figures from his past had inspired me to re-examine how I view my own possessions, and the stories from the past that they contain.

Thought-provoking and comedic, John Feffer’s Stuff will engage you from start to finish. Who knows? Maybe he will inspire you too.

RATING: BEST OF THE 2015 CAPITAL FRINGE.