Kris Noteboom is incredibly endearing. The fluffy, neurotic figure at the heart of And Then I Woke Up establishes very quickly that there’s little space between Kris the artist and Kris the character. He, like so many solo performers, is at his best when forming intimate and honest connections with audience members. In these moments, streams of impassioned authenticity emanate from Kris’ wild, gesticulating arms as he excitedly shares a casual assessment of Freudian psychology or the science of dreams or the universal nature of human fear. 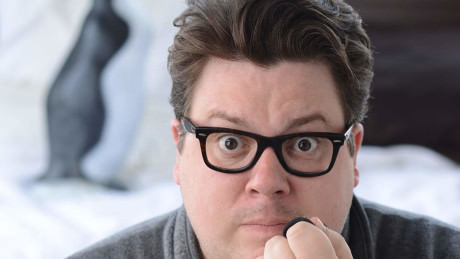 It helps that Noteboom is a genuinely funny guy. Freudian psychology isn’t always the most riveting topic; Noteboom’s wonder-filled delivery makes it work. He’s never ashamed to take a wry or surprising turn in his storytelling, never afraid to crack a joke, never hesitant to make fun of himself and his own failings.

And you can’t help but go, “hey, man, I feel ya” when, amidst all the huff and puff, he stumbles upon a kernel of truth during his many entertaining bouts of mental calisthenics.

But And Then I Woke Up is sometimes held back by a disjointed narrative structure which prevents these moments from popping up more frequently. The show works as an informed and deeply personal exploration of dreams both literal and metaphorical. It struggles when Noteboom gives in to digressionary impulses that force the audience to wait up while he lingers on prolonged bits, such as explanations of why you don’t drive in San Francisco or a meticulous detailing of the plot of Paranormal Activity. He falls into Family Guy style aside-humor when the real meat of the show, not to mention the truly funny stuff, exists within the narrative, not beside it. Despite some of these languid hiccups, Noteboom’s goofy charm, entertaining quirks and keen insights result in enough rewarding moments to make up for his minor indulgences.

And Then I Woke Up is Noteboom’s first solo show, though Capital Fringe is its third staging following runs in Dallas and L.A. That past experience is a huge benefit when you consider how raw most Fringe shows tend to be. Noteboom has the tone of his piece down and delivers it with seasoned confidence. If you’d be interested in spending an hour in an air-conditioned (!!!) room while an affable thirty-something dude in emperor penguin pajama bottoms riffs on the philosophical links between sex dreams and the American dream, well, then this show is probably for you.

And Then I Woke Up plays through Sunday, July 19, 2015 at the Argonaut Theater on 1433 H Street NE, in Washington DC. For performance times and to purchase tickets, visit the Capital Fringe page.