You never expect to sympathize with the murderer and rapist. You expect to be repulsed and disgusted by them. That, however, would do a disservice to the complexity of life, particularly in war-torn, underdeveloped countries. Neda Wants to Die, written by Luigi Laraia explores this gut-wrenching theme with amazing dramatics and candor. It is the harrowing story of a UN refugee case officer who must hear the stories of those seeking international asylum. The play centers around two case studies, a woman named Neda who survived unspeakable acts, and a man named Laurent who survived and perpetrated unspeakable acts.

It is the story of the destructive nature of hatred and violence and the actors of the four-person cast are, frankly, brilliant: 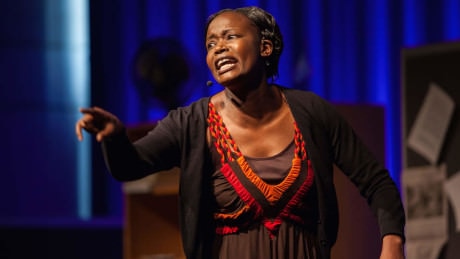 What an ensemble! They portray the complex emotions that go with telling stories of violence and listening to those stories so well.

And the stories are brutal. Elle and Wright both do phenomenal jobs of displaying the anger, pain, and hatred of people trapped in a war-torn country, forced to survive unspeakable acts of sexual violence. Both have frighteningly vivid and gruesome stories to tell. And both are incredibly talented as they progress from timid and fearful, unwilling to share their stories, to enraged and impassioned as they explode with years and decades of pent up fear.

Tanenbaum has to deal with the painful act of listening to these stories and trying to help the victims, though he often feels powerless to. It is an awful emotion to feel and Tenenbaum is brilliant at displaying this fact.

Neda Wants to Die is one of those pieces that reminds us how important theatre can be, not just as a medium for entertainment. The play is powerful, passionate, and raw. It describes a world that most of us couldn’t hope to understand – and wouldn’t want to – and puts it into perspective. Theatre can sometimes be a brilliant way to open dialogue about uneasy topics in constructive ways. Neda Wants to Die is a fantastic manifestation of that idea. Beware, it’s not for the faint of heart, but if you can stomach the stories, it might be one of the most important topics brought up at Fringe this year. Don’t miss it!

Running Time: 85 minutes, with no intermission.