Movie star Bette Davis used to say that she always wanted a crack at playing the title character in Lewis Carroll’s Alice In Wonderland. Davis thought Alice a spitfire like herself, not a sweet demure little girl as often portrayed.

Monica Dionysiou finds her own guiding light in Paper Glass which is adapted from Carroll’s Alice Though the Looking Glass as she plays Alex White, a ten and half-year-old girl, with rebellious spirit. 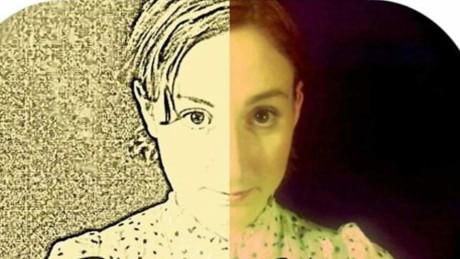 How does Dionysiou create a classic character and yet make it her own in the small space that is the Argonaut Theater? As a solo performer, Monica Dionysiou, young herself and playing younger, becomes a bright inquiring child challenging authority at home and in school–she acts out a hilariously stuffy schoolmarm and Alice’s more sympathetic mother. Little girls, she tells us, must speak when spoken to. must not play with scissors, must think when curtseying. If few girls today curtsey on either side of the Atlantic, the restrictions of conventional behavior still seem palpable.

Dionysiou’s costume, while suggesting girlhood, is not from the Victorian period. The biggest prop in the show–and this is not really a spoiler–is the contents of Alice’s trunk, which all but explode to cover the stage, to the surprise of the audience and allowing the actress to display theatrical agility and movement.

Was this in the book? Probably not, and not all of Carroll’s most recognizable lines appear such as the ones about “jam tomorrow and jam yesterday–but never jam today.” Still, the show might have people going back to the original.

Monica Dionysiou’s theater group MonTra Performances is based out of Boulder, Colorado. Paper Glass is not any standard telling of the Alice story. The intimate setting benefits the sort of audience willing to go beneath the glass, so to speak, and seek out hidden meanings. And what a wonderful performance they will see.

The show is appropriate for audiences 13 and up.

Paper Glass plays through July 19, 2015 at the Argonaut – 1433 H Street NE, in Washington DC. For performance times and to purchase tickets, visit their Capital Fringe page.