“Stop and possess this day and night with me and you shall possess the origin of all poems,” Walt Whitman demands of his readers of his most famous work, Song of Myself. Robert Michael Oliver and the Performing Knowledge Project demand the same in their compelling piece Poe Whitman. 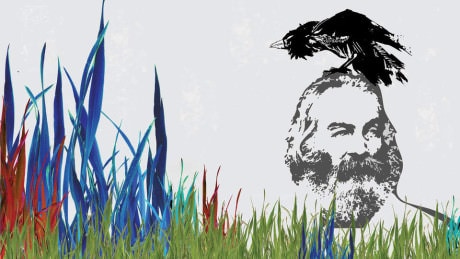 Both conceived and performed by Robert Michael Oliver, Poe Whitman brings to life the works of two of the most influential writers in the American literary canon. These works are presented in repertory, meaning the performances alternate – one consists entirely of Whitman and the next is entirely Poe. I had the opportunity to attend the Whitman performance entitled Song of Myself: The Walt Whitman Project which reintroduced to me a work that I hadn’t read in years.

In a performance full of passion, Oliver masterfully plays Whitman. The minimalistic set provides him a blank page on which he can inscribe Whitman’s text, and Oliver completely lives in each phrase, breathing even more life into every one of Whitman’s already-exuberant words. He surrenders each physical movement and visual moment to the literature.

Though Song of Myself certainly celebrates American life as Whitman himself personally experienced, audio and visual elements make the piece applicable to the audience members unfamiliar with Whitman’s work with whom the play might otherwise lose its appeal. Projections, which include photographs by Francisco Rosario and music by Matt “SwampGuinee” Miller, are used throughout the performance to give audiences a visual of the America Whitman knew in 1855 when Song of Myself was first written. The final film, I Contain Multitudes, with direction by Oliver and filmography by Chad Lawrence, features citizens of Washington D.C. reciting Whitman’s verse in various D.C. locations, celebrating life in this vibrant city.

Poe Whitman is no doubt an enormous feat for Oliver and the Performing Knowledge Project, and Oliver’s commitment to his performance fused with the utilization of modern technical elements create a jubilant celebration of one of our most quintessentially American poets. Don’t miss it!