Did you know that Edward Snowden actually worked for NASA, not the NSA (the misunderstanding stems from a typo in a Washington Post article)?  How about the fact that the Cold War was actually caused by some naughty photos of Vladimir Putin falling into the hands of Larry Flynt, owner of Hustler magazine? (Don’t worry though, those photos have since been blown up by the IRS.) You must certainly know all about Christopher Columbus’ mafia connections, right? No? Well then get thee to the Tree House Lounge and learn the truth from Matthew Vaky in his play, Roger (Not His Real Name)! 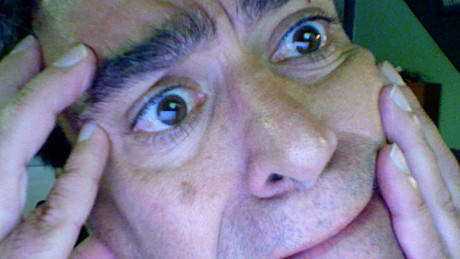 This ambitious show, written and performed by Matthew Vaky and directed by Gillian Drake, is what a TED Talk would sound like if given by a paranoid drunk in an alleyway. Vaky’s one man performance is a monologue that meanders its way from tangent to non sequitur to burst of song and back again.  He earnestly outlines his conspiracy theories, peppering in some personal history, and does his best to convince you of The Truth. Paper and pens are shoved into audience members’ hands while he implores you to take notes. And you know what? You find yourself almost buying into his crazy notions until Vaky jars you back into reality with a heartbreakingly disturbed outburst or manic gesture. One person shows can be tricky, but Vaky does a great job carrying this one using his haunting dark eyes and hypnotizing voice to great effect.

Although the space is miniscule, the set transports you to “Roger’s world of trashcans, stray litter, and even a real No Parking sign, all his worldly belongings not even filling their pitifully small crate. Ambient street noise and perfectly timed music by Gregory Thomas Martin subtly enhance the illusion. The venue may be a bar, but, thanks in part to stage manager, Nick Vaky, the production itself is a polished and professional little slice of another world. I urge you to come join Vaky in his strange wonderland  You at least need to learn about how EVERYTHING actually links back to the Hubble telescope!

Roger (Not His Real Name) plays through Sunday, July 26, 2015 at the Tree House Lounge – 1006 Florida Ave Ne, in Washington, DC. For more information or to purchase tickets, visit their Capital Fringe page.