Let’s play a game. The Game. It has an extensive set of rules. The point system is arbitrary. One of the rules is that all the rules can be broken. And you really cannot win. Sound like fun?

Welcome to Nu Sass Production’s The Paper Game by Julia Holleman. Before entering the theatre the audience is asked to play a game of their own. A lucky three “bingo” winners are brought up on stage while a cast member asks random questions and awards random points. Only one lucky winner, not necessarily the person with the most points, walks back to their seat with a prize. 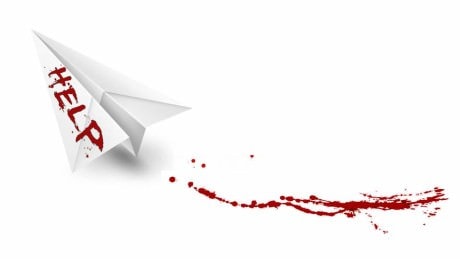 The set, smartly designed by Eric McMorris, makes a good first impression. It is constructed almost entirely out of paper. A paper floor, a paper platform, a paper desk, and boxes and boxes of paper create a grand tableau. Perched at the top of the platform,  primly seated behind a desk, is the human embodiment of The Game. Brilliantly depicted by Bess Kaye, The Game never speaks and barely emotes, but Kaye provides a strong influencing  presence that is felt throughout the production.

On stage left Jane and Robert, professional “rescuers”, sit at a card table discussing the rules to a board game. On stage right Denise and Ty, presumably lower status employees of the same corporation, play dominos in a storage room on the floor bellow. Cue earthquake. Boxes fly off the shelves in the storage room and Ty’s leg is crushed and trapped under an avalanche of papers. Denise and Ty are trapped and there is no way out. Upstairs the rescuers do nothing. It is not an emergency until someone says it is. Finally sirens are heard and Jane and Robert jump into action. Or rather, meander into action. They slowly and  painstakingly examine how they should best use their limited resources to rescue the most valuable earthquake victims.

Denise isn’t about to let herself waste away in the basement storage room. After a variety of amusing attempts she is finally able to get Jane’s attention and beg for help. Robert, who clearly has all the power at this point, insists that using their resources to help just two people, even if they are just one floor away, will effectively kill all of the orphans, school children, and fashion models that they could be saving in that time. Jane is adamant that Ty and Denise should be helped.  Tired of arguing, Robert proposes playing The Game to determine if Ty and Denise are worth saving. And so the game begins.

It is clear from the start that Robert, played to great effect by Keegan Cassady, has the upper hand in the game. Cassady’s Robert has the air of a self assured game show host. Robert’s mentee, Jane, played by Aubri O’Connor, is the clear underdog. With endearing quirk she tries to simultaneously understand a game that follows no logic and do the right thing. O’Connor has the audience rooting for Jane as she gains confidence and takes a brief trip to the top. Ronnie Brown plays a likable if somewhat naïve Ty. Both character and actor get a rough deal in this production, it’s no easy task to remain stuck under a large pile of paper for 90% of the show. Despite limited opportunities for mobility, Ty remains pleasantly involved throughout the show, even in the face of betrayal and imminent death. The final character, Denise, is a natural at The Game. Tiffany Byrd plays her sharp and smart. Byrd delivers quick comebacks with an assured confidence that has the audience sure Denise will win. But nobody can win.

Expertly directed by Renana Fox, all of the elements of The Paper Game fall neatly together to create a unified production. The sound design by Aaron Fensterheim and lighting design by Colin Dieck sync up nicely. While The Game is in full swing a buzzer and red flashing lights correct the participants if they misstep, and a bell and a green flashing light rewards the participants for following the rules.  Whatever those are. The earthquake sequence is another lovely theatrical moment to behold, combining the use of lights, sound, actors, and a malleable set. Even the costumes, which could easily have been generic business attire, brought something unique to each of the characters.

The Paper Game presents the audience with a fun and intentionally frustrating allegory for systems of rules and technicalities that sometimes help and often hinder our ability to get things done. As the show progresses the audience becomes more and more aware that almost an hour has passed and earthquake victims are dying while the characters on stage have still achieved nothing productive.

A snappy sixty minute show, I left the theatre wishing for an Act II. Nu Sass Productions celebrates their six year anniversary with The Paper Game. Here’s to hoping they have another six years of excellent productions up their sleeve. Nobody can win The Game, but you will walk out of The Paper Game feeling like a winner.

The Paper Game plays through July 25, 2015, at Atlas Performing Arts Center: Sprenger – 1333 H Street, NE, in Washington, DC. For schedule of performances and to purchase tickets, go to their Capital Fringe page.