If you are not quite aware of what you are getting into before watching Uncle Funsy’s production of Wombat Drool, you may be a bit confused as the retired Zookeeper David S. Kessler begins to talk about his fascination of wombats and other small mammals. It is not what one might expect when attending a fringe production, but really what is? You might be asking yourself what exactly is happening here at first, but this lovable and engaging scientist will have you won-over within minutes in this fun show. 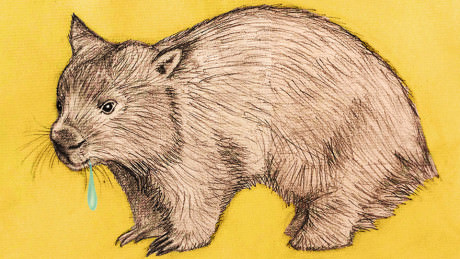 The show is described as a fictional story of K, a lovable zookeeper. Paralleled to the writer and star of the show David Kessler. He creates a fun character called K, who talks about the crazy but fun stories that only a small mammal zookeeper might know. From Wombats to Red Pandas and the naked mole rat, K will delight you with little known facts and his pure love of all animals.

Kessler was a zookeeper in the National Zoo for 4 decades and his passion shows through in this fun little romp of a show. He holds nothing back as he shares stories pulled form his experience with animals from some involving animal poop which he seems to make seam fun? To more endearing stories of relationships he built with animals who were relegated to a misfit section of the zoo. One story he share of a Siamang Gibbon named William he cared for had me welling up with tears.

Kessler has spent his life caring for animals, and it shows in the passion he shows in this fiction based in reality show. Storytelling is definitely an art form only few master and Kessler is certainly one of them. I encourage you to check out this fun adventure of a show. You may be wondering if you accidentally walked into a dinner party with one really boisterous uncle, but soon you will have yourself enthralled with his stories and awed at the pure love he has for the animals he cares for.  Grab a beer or glass of wine and settle yourself in for a fun little show at the Argonaut with Wombat Drool.

Running time: 60 minutes with no intermission

Wombat Drool plays through July 19, 2015 at the Argonaut – 1433 H Street NE, in Washington DC. For performance times and to purchase tickets, visit their Capital Fringe page.

RATING: THE BEST OF THE FRINGE