Venus in Fur directed by John Dellaporta opened last night at Silver Spring Stage, literally with a bang. The play opens during a thunderstorm that is a metaphor of the action to come, and takes place in an old beaten building now a rehearsal hall.

The Set Design by Jimmy Stubbs, Lighting Design by Peter Caress and Sound Design by Rich Frangiamore take us to an old flat, probably in New York, with one water-stained wall and one brick wall, a circuit breaker box, old utility pipes, and a radiator. Incredibly, there is rain running down the windows, and we hear the thunder and see the lightning outside. There is only a divan and desk and some chairs for sitting.

On stage is Thomas, a playwright, who has has been holding auditions for his play called also Venus in Fur. He is about to go home after dozens of auditions of young women for the main role when in walks Vanda, who is very wet and very late. She is dressed seductively under her bright red raincoat in black spike heels, black stockings with garters to match, black panties, and bra and black bustier. She looks more like a hooker than a would-be actress thanks to Costume Designer Kristina Martin. Her voice is like a tough gal from the streets, not a trained thespian. Yet, she manages to talk Thomas into letting her audition.

The main character in Thomas’ script is also Vanda, but is totally different from the tough cookie that walks in the door. The character in this play-within-a-play is sophisticated and serious. The actress Vanda seems much more earthy and witty by comparison. Thomas has agreed to read the male lead for the audition, although he claims he is not an actor.

One of the first clues that things are not what they seems is that Vanda is already able to recite the lines “off book” while Thomas, who wrote the play, must follow every line. The whole plot switches between the characters in the play-within-the-play and play itself, blending and reversing constantly as do the roles of the masculine and feminine personalities. Who is in charge and who is submissive? By the end, you may wonder what is reality and what is fantasy, not just for Thomas and Vanda, but for the playwright.

David Ives is best known for his One Act plays, and his collection, All That Timing, has been performed very often. There are no scene changes or action leading to the climax of an Act. It’s really a long One Act. As in a short story, the tension builds right to the very end. When the plot concludes there is no epilogue or denourment. The viewer may not be used to this framework, but it perfect for Venus in Fur.

This is a two-performer play. Thomas is on stage constantly and Vanda from her entrance just a few minutes into the show. Chris Andersen (Thomas) and Alexandra Friendly (Vanda) carry this off smoothly. Their lines flawlessly blend, and their movements are always in sync.

Andersen does an amazing job going from the bland Thomas to the sadomasochistic character in the play within the play. As both characters change back and forth before our eyes, we see Thomas go from the playwright with the attractive successful fiancé to one who is predictably tempted by Vanna.

During the final 15 minutes, he jumps into three different personalities so effortlessly I forgot I was in a theater and felt more like a voyeur looking into someone’s window. Friendly makes these transitions masterfully as well except she has to do it in a very revealing costume. She does this as Vanda would – without any modesty or self consciousness. This takes a very confident actress. Friendly uncannily jumps from the earthy Vanda to her sophisticated counterpart often in less than a heartbeat. At the beginning it actually is startling.

Both Andersen and Friendly have been active in local theater including The Fringe in D.C.. Friendly is a trained opera singer who recently has debuted in “straight theater.”

Director John Dellaporta, a graduate of Catholic University, has directed and acted n the D.C. area and will be starting an M.F.A. program at U.C.L.A. in acting in the fall. He had a huge task at this theater moving the actors to have visibility to both sides of the audience and deal with a rather large pole part of the architecture of the Silver Spring Stage. He has collaborated with his designers to allow the action to flow without blocking out the audience. He lets the plot move along without interference. To quote Dellaporta, “Most importantly, Ives taught me to trust the playwright, get out of the way, and tell the damn story.”

Again, I have to give kudos to the designers. The set looks simple put is quite intricate. They had to construct a rain machine, and create a back alley that looked so real you will wonder if the window faces the back alley in the mall where the theater is located. The brick wall looks so realistic that after the final curtain we examined it closer and could not tell for sure if it was some sort of real brick or a painted flat.

According to Set Designer Stubbs, it was done by texturing paint and creating shadows. Each brick is unique and shaded to reflect age and light. The thunderstorm which rages throughout the show is almost a character itself. Sound and lights are perfectly coordinated. The ingenuity of having the rehearsal hall illumination go from fluorescent lights and then stage lights and then back again several times in the show is not obvious during the show, but the realization of this later is a marvel and a testament to the many young talented technical people trained at our colleges today. 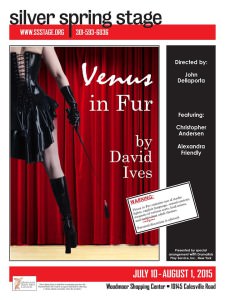 Silver Spring Stage continues to be a showcase for rising stars with the production of Venus in Fur. Don’t let the heat or summer storms keep you away. The gods and goddesses would not be pleased.

Running Time: Approximately 90 minutes, with no intermission. This play is for mature audiences.