This is a rare opportunity to see the avant-garde Theatre of Self-Loathing, bringing the best of Eastern European theatre to the DC audience. Eddie and Cassilda, winners of the 2003 CAPB Award, are in residence with Blind Pug Arts Collective this summer to produce their admired meta-theatrical piece Who’s Afraid of Virginia Wolf?  It is an exciting, explosive, sometimes profane experience. 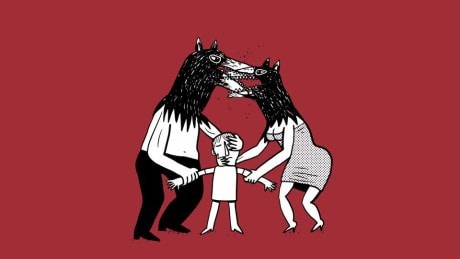 Eddie and Cassilda, in the tradition of Artaud and Grotowski, are gifted artists, and their work is challenging, confrontational, and satiric. The Theatre of Self-Loathing (ToSL) has a number of rules: Never produce Oklahoma (they are on solid ground here); never die facetiously on stage (a good idea) and kill your idols (well, many artists do, if not literally). The program states that “Program notes are the death of theatre” and “Entropy is the only truth”.

The Glass Menagerie is skilfully satirized, with Eddie as various glass animals, Cassilda as Amanda Wingfield, and a doll, which needless to say gets very rough treatment, as Laura. Our “unhealthy obsession” with the works of Chekhov is eviscerated with a snippet from The Seagull; and Shakespeare is represented by lines from A Midsummer Night’s Dream, Othello, and Twelfth Night.

Many tricks are played on the audience. One audience member is crowned, and then de-crowned; at one point the audience is asked why they came.  Actor 3 does an amusing turn as he anatomizes the numerous superstitions of the theater; don’t say “Macbeth!”; don’t wear blue, don’t bring peacock feathers on the stage, and always leave a light on.

The combination of visual elements and verbal gymnastics is strikingly original, and there is much wit and audacity on display. Sound Design (Niusha Nawab), Light Design (Nate Collard), and Production Design (Joani Maher) are up to the same high standard. For the theatrically adventurous, and that’s what the Fringe is all about, Who’s Afraid of Virginia Wolf? is cause for celebration.

Who’s Afraid of Virginia Wolf? plays through July 26, 2015, at the Eastman Studio Theatre in the Elstad Annex of Gallaudet University – 800 Florida Avenue. NE, in Washington, DC. For schedule of performances and to purchase tickets, go to their Capital Fringe page.