Live Action Theatre more than lives up to its name in its recent production of Hero Complex. The Action starts right away, when aging superhero Eddie Lear (Peter Boyer) accounts his numerous exploits and campaigns against evil. He describes fighting his nemesis Mind-Bender, warding off an army of Space Bugs, and neutralizing a pack of sentient robots, with the pace and panache of an action movie. 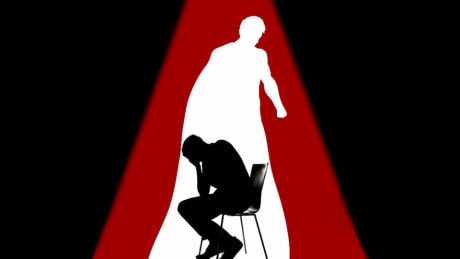 The Live is absolutely essential; we are not watching a film after all. Boyer’s storytelling is accompanied by James Finley wonderful foley sounds, filling the theatre with enough POWs, BAMs, SPLATs, CRUNCHes and ZOOMs to satisfy any comic book fan. Though this throwback to old radio drama sound effects may make you want to listen with eyes closed, don’t! Half the fun is watching the myriad bizarre objects Finley uses, including soda cans, old pairs of shoes and paint stirrers. The other half of the fun is in watching Boyer’s captivating performance of the stories, often completing one-man combat sequences against himself.

And this is of course where the ‘theatre’ comes in. This company has excelled at building a show around their intense knowledge of stage combat techniques, producing countless successful illusions of violence. The action is ratched up 100 fold with the presence of blank-firing weapons, using a reported 30 rounds per night. It takes a powerful performance to match the overwhelming BOOMs of real gunfire, but this cast is more than up to the task.

Hero Complex is not just a high octane, heavy-on-action, light-on-content story. While he is reliving his past triumphs, Eddie is faced with a very profound question: what if none of it actually happened? Can he trust his memory? What happens next involves such a stunning array of plot twists and surprises, I’m afraid to say anything else for for fear of dropping spoilers.

If you are looking for an exciting, high powered show, with a clever superhero twist and great storytelling to boot, look no further than Hero Complex.