Alexandra Petri’s Never Never is absolutely brilliant. It explores a heavy topic – pedophilia – without being overbearingly serious and dark. In fact, it was wildly funny. That said, Petri treated the topic at hand with the necessary solemnity and sincerity. She didn’t get her laughs by making light of the pedophile’s struggle but through the snarky and witty humor constantly present in the characters’ regular banter. 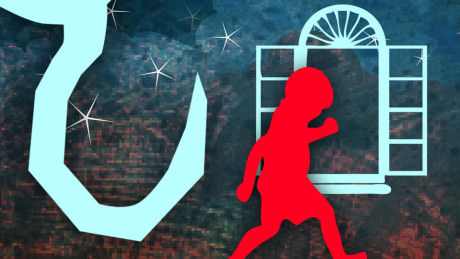 The production was not only fascinating intellectually but also had great visual elements. The background of the stage had two colossal structures, one made out of doors and one out of windows. It was a visually awesome way of filling space on that huge stage for this four-person cast. You can thank Greg Stevens and Joshua Stewart for the stunning sight.

Sound Designer Kevin O’Connell also deserves the highest praise. The signature ominous ticking sound, which made appearances throughout the production, effectively built suspense for the serious portions of the play and built up the laughs during the funny portions.

The cast was almost disconcertingly believable.

Seth Rosenke, who played Kyle, was the rock that held the production together. Not only did he excellently lead the charge in terms of humor and comedic prowess but he also delivered some of the most important lines and messages of the production with fantastic poignancy.

Latia Stokes, who played Becca, was simply stunning. Her performance was emotionally dynamic and she was wonderfully expressive and emotive. She also brought a great sense of kindness and hospitality to the role which was best displayed when she hosted Thanksgiving dinner. Her dynamism is her strength as an actress and she showcased it brilliantly as she displayed the complex emotions one would expect out of a woman finding out that the love of her life is attracted to children.

Matthew Sparacino, who plays Matthew, Becca’s wife, was equally impressive. He is really successful at embodying the unrecognized harrowing lust and the terrified self-loathing that comes with it for his pedophilic character. This is on full display during his final monologues as the play winds down. His is truly a spectacular performance.

Lizzi Albert, who plays Amy, exists mostly for much-needed comic relief in this discussion of such a disturbing topic. She’s maniacally sassy, witty and pure fun, particularly when she comes on stage at her job as a sex-hotline operator. She also very capably holds her own in her less common serious moments and is such an eye-grabbing commanding force on stage.

Never Never does the impossible by seamlessly intertwining a topic of the utmost importance and seriousness with riotous laughter. The result is an emotional roller-coaster with the potential to bring tears to your eyes, both through laughing and crying.

If you can only see one show at this year’s fringe festival, you ought to make it Never Never. I only wish I could give it more than five stars.