What happens when memories of your past begin to sabotage your present? Doorway Arts Theatre Company tackles this question head on in Out of Sync, a new play by Katie Woods.

In the first scene Nathan and Petra are on a first date. It’s awkward and Nathan is nervous, but Petra thinks he’s cute and is not too shy to tell him. Quirky and blunt, Petra quickly wins over Nathan. Over time their relationship begins to grow, but just as Nathan begins to relax into the relationship his ex-girlfriend Amy shows up. This is where the show becomes more abstract: Amy is a figment of Nathan’s memory. Abstract movement and a change of lights is used to separate the world of memory from reality. Nathan’s forays into his past begin to happen more often and Petra begins to ask questions. As Petra persists in her inquiries the play shifts between reality and memories, exposing more information from Nathan’s past. 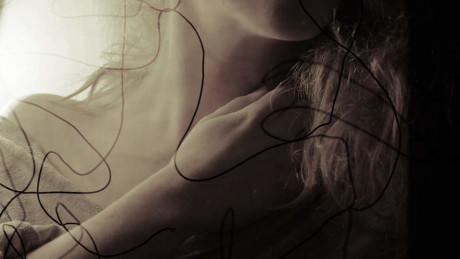 Shravan Amin is likable as awkward and conflicted Nathan and Megan Malone Behm’s bold Petra works well as a counter balance to Nathan’s shyness. They have a sweet chemistry and play well off of each other. Alison Talvacchio plays Amy, who we learn struggles with depression. Talvacchio plays depressed well. That being said, I would have liked to see her play more with different levels of depression and give the audience a hint of the Amy that Nathan fell in love with.

Talvacchio also choreographs, using movement and dance to create a distinction between the memory world and reality. This is a nice touch as it adds dimension to the memory sequences. There is room for these sequences to become even more realized.

Mary Cat Gill takes her first spin as a director with Out of Sync, and does well handling the different realities within the play. The Lighting Design by Gordon Nimmo-Smith takes on a lot of the responsibility of guiding the audience through these switches, adjusting the intensity of the light to go with each world. The stage is bare except for a table and chairs down stage left and a couple of benches stage right. As a collaboration with local visual artists Maggie Michael, Mike Anderson, and Amy Bergman, three metal sculptures adorn the set, a nice addition that accentuates the abstract structure of the show.

The first scenes of Out of Sync are fun and full of heart. The pacing at the beginning of the show works well, dipping in and out of Nathan and Petra’s quickly developing relationship to visit the slower paced world of memories. As the play goes on Nathan and Petra’s plot line looses steam and the narrative shifts to focusing on Amy’s depression and Nathan’s difficulty in dealing with it. At this point the plot begins to feel stagnant. The script becomes overwritten and the actors struggle not to be bogged down by the text. But this is the first staged production of Out of Sync. Based on the solid structure and snappy dialogue in the first half, Woods has the capability to make revisions that will allow the show to finish off strong.

Out of Sync takes a creative approach to examining both the people suffering from depression and the people that are trying desperately to help them. Ultimately it asks at what point it is okay to let go and move on.