There’s nothing a Fringe audience loves more than remixed Shakespeare. And there’s nothing DC loves more than politics. To Err is Falstaff goes right for the jugular, hitting Capital Fringe with both at once, in this silly comedy which casts some of Shakespeare’s greatest characters as DC’s smarmiest politicians, political advisors, strategists, and pundits. 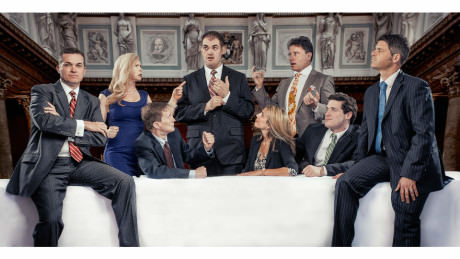 We are introduced to John Falstaff (Stephen T. Wheeler), advisor to presidents, kings, and anyone who will pay his exceedingly high fee. He is the arrogant leader of K Street’s most powerful lobbying firm, Measure for Measure. His dominance is rivaled only by his crosstown rival, Kate “The Shrew” Minola (Karen Dadey). Each is running a candidate in the 2016 U.S. Senate race: Titus Andronicus (Cal Whitehurst), the incumbent Southern buffoon, versus sleek newcomer Coriolanus (Mike Rudden). Andronicus’s entourage consists of Polonius (Brian Clarke), Ophelia (Megan Waidelich), and a strangely English Macbeth (Mike Hutchins).

With this set-up, I was looking forward to the flurry of Shakespearean puns and political jokes that would no-doubt ensue, and there were some good ones: Polonius as the fall guy for everyone, Petruchio double-dealing with his lover Kate, Coriolanus’s campaign being based on his status as a triumphant war hero, and the fact that Ophelia was only hired because of her father. The rest seemed to be a series of missed opportunities. Beyond these slight winks at their namesake characters, the closest many of them got to really referencing Shakespeare was spouting random quotes, often from plays and characters not involved in this story.

The set-up proves that Playwright Louis James Brenner’s appreciation for Shakespeare is there, but the play could be improved greatly with just a bit more digging on his part to really connect this story with those of his borrowed characters.

There were several good performances, including Dadey as the manipulative Shrew. Her dynamism and vocal presence electrified the stage. Whitehurst was charming in a powder blue suit and bowtie, every part the stereotype of a Southern senator.

Upon entering the cool new Logan Fringe Art Space Upstairs venue, I was instructed by the usher that the space was set up in the round and that every seat was good. This turned out to be patently false. It became clear within the first few minutes of performance that I had chosen the wrong side of the stage, and spent the majority of the play looking at actors’ backs, making it very difficult to follow the story. I would love to see the play again, set on a proscenium stage, so all audience members have an equal view of the action.

I do hope this company continues to work on this play or others like it. The actors, director, and playwright show great passion and talent, and with a little more work, they will certainly have something great on their hands. After all, some are born great, some achieve greatness and some….well you know the rest.